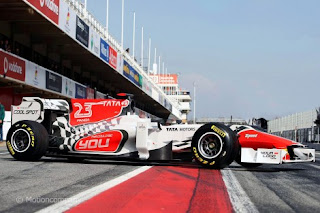 NOTE:
Although this article is slightly dated –especially with The Speediest Indian’s monetary backing securing Hispania’s 2011 season, nevertheless it does provide some technical insights into the Team Willie Gearbox supply deal...

Summary
And then there was ‘Juan Indian left... Sorry ‘bout that Folks, just couldn’t resist, especially with Dr. Colin Kolles constant barking on ‘bout having secured the services of “The Speediest Indian,” nee Narain Karthikeyan – which was a real shock to Mwah when it was divulged way back in the beginning of January.

And with less than 3-weeks remaining until Australia, it was finally made official that Vitantonio Liuzzi would be driving HRT’s second racecar and thus, the 2011 Grid was finally set – just a scant 3-days prior to the team’s 2011 challenger, the F111 breaking cover at Barcelona during the final test session.

The team’s first completely “Clean Sheet” design (the F111) was overseen by Technical Director Geoff Willis of Williams, BAR and Red Bull fame, albeit I believe he’s still working as a Consultant to the team...

And according to Adam Cooper, the F111 utilizes a 2010-spec Williams Gearbox, who are providing the chassis hindquarters. While HRT won’t be running KERS, a la its Newboyz competitors Team Lotus and Virgin; as both Hispania & Virgin will use a lower spec ‘Cossie lump vs. Williams KERS version... Interestingly, the chassis monocoque was built by composite specialist CarboTech of Austria – who’ve steadily been building up their F1 clientele.

Yet with all last minute launches, apparently the F111 didn’t run on its Friday debut due to a lack of parts and team has since revealed that the car won’t run in Spain due to some components including the dampers being denied release from Customs, as hopefully this isn’t an ominous sign of the F111’s impending season...

Hmm? Wouldn’t it be funny if ‘Tonio could end up challenging the Force India’s for championship points this season?

HRT NOT worried ‘bout Karthikeyan's lack of pace...
Posted by Tomaso at 9:05 AM