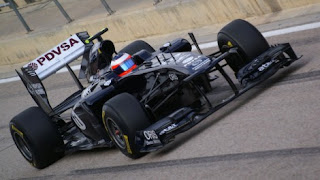 Summary
Like many teams, Williams is using all of the requisite PressSpeak lingo – claiming its FW33 is “Aggressive.” (Design-wise) Although for Mwah, I’ll wait to see its Ontrack results before making any decisions. The part I was most curious ‘bout was what style of KERS Team Willie was utilizing? Recall that its sister company Williams Hybrid Systems has previously run a centrifugal clutch system on its F1 chassis – and holds multiple patents for this technology. But according to PitPass; Sam Michael claims that the 2011 rules favour the usage of the Deriggor electrical battery pack system instead – which Team Willie has designed an In-house version of this for the FW33, which like all new systems has undergone some teething issues during this seasons “Winter Olympics.” (No word if this will be part of the package supplied to Hispania?)

On the driver front, I’m guessing Y’all know ‘bout Williams cashing in upon reigning GP2 Champion Pastor Maldonado, whose PDVSA Oil Moolah is reputedly worth a cool $36m per season to the Grove base team, hence the departure of rising German star Nico Hulkenberg to Force India.

Meanwhile the team is banking upon ‘Rubino to lead the way once again with his vast Formula One experience, as after all Barrichello has the most Grand Prix starts in the sports history, along with having won two races in 2009 for BRAWN GP...

Team Willie debuts Final livery
Posted by Tomaso at 10:07 AM