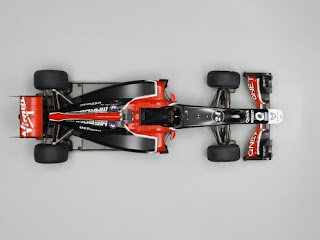 Summary
With the Marussia Car Company buying into the Virgin F1 project, not only has the team’s name changed, but there have also been numerous changes in the organization’s structure.

And with the multitude of changes – which the ‘Juan I’m most happy to see is Ian Phillips return to Grand Prix Racing after being unceremoniously Dumped by Vijay Mallya... As Phillips will take up the post of Chief Operations Officer, (COO) which to Mwah – is a definite coo for the team. (PUN intended...)

Next, the team further strengthened its Technical Staff with the addition of disemboweled ex-Renault Executive Engineering Chief Pat Symonds, who’ll work strictly on a Consultancy basis, as the Englishman is temporarily Persona-non-Grata in the F1 Paddock until 2013...

And thus back to the task at hand, the skinny upon this season’s MVR-02 chassis which was unveiled at the BBC Television Studios in London. I’ve read that it features a lower front nose profile then the rest of the 2011 Challengers, along with being the only 100% Computational Fluid Dynamics (CFD) designed chassis on the grid. (For the second year in-a-row...) What seemed to have been left outta the glitz ‘N glamour at “BBC-5” was the fact that the South Yorkshire-based squad is the second Formula One Constructor to eschew utilizing KERS; joining Team Lotus on this decision, as I won’t be surprised if Hispania decides to do so also... As after all, Professor (Steve) Matchett was quick to point out several times last year – Just get the Blimey-thing to run ALL the way to the end of a Grand Prix first! Not to mention the fact that the three Sophomore Constructors are probably trying to save a little Dinero upon developing this somewhat complex system...