Redlining a Ferrari - The Sequel 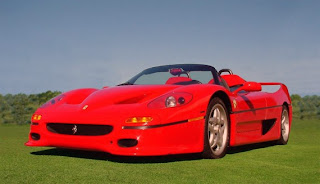 So I must say that this ranks right up there alongside that monumental El STUPIDIO maneuver comedian Eddie Griffin pulled way back in 2007, which I scribbled ‘bout in; Redlining an Enzo...

Thus I was somewhat amused when hearing recently that an Insurance firm has been forced to go to the extreme measure of what Donald Kay likes to routinely refer to as duh good ‘Ol Gubb’ment; Hya! As apparently an FBI Special Agent decided to try impressing an Assistant Attorney General during a very short-lived joy ride in which said Agent promptly punted a recovered Ferrari F50 into a tree; OUCH!

Michigan insurance company sues feds over wrecked Ferrari
Posted by Tomaso at 7:56 AM