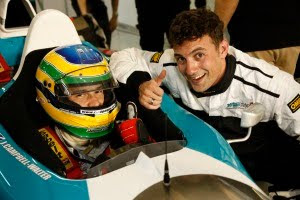 “Bruno and his Abu Dhabi-HRT team-mate. If I can find the cash.”
Will Buxton & Bruno Senna at Yas Marina – Photo by Darren Heath.
(Source: willthef1journo.wordpress.com)

Previously in Suzuka Memories I scribbled,
Thus it was interesting to hear “Willie Buxom’s” testimonial of riding in a Two-seater with Bruno in Abu Dhabi over the Singapore – Suzuka break... (Talk ‘bout living a Charmed life, Eh!) As Messer Buxton explained how nauseating the ride was; with Senna wanting to demonstrate how VIOLENT a modern F1 car is, as the ‘Back markers all struggled to drive a Pig ‘O a Racecar whilst looking in their mirrors all race long! And their 2X Seater’s ‘Grunt was only equivalent of a modern day GP2 Asia chassis; CRIKEYS! (As Bruno was 6-seconds adrift of Vettel in Friday’s Practice 2...) So it would be nice if Mr. Buxton could scribble out his thoughts ‘bout this on The Buxton Blog.

YIKES! Ask and Thou Shalt Receive! As Messer Buxton has just posted a ‘Mega 2-part story ‘bout his unbelievable outing at the Yas Island Marina Circuit. Taking part in a Media Conference that also included James Allen amongst others...

As ‘WillieBoy had a Dream Vacation – if I’ve ever heard of ‘Juan, eh? Arriving in his 5-star Hotel room to find a brand spankin’ new pair of Puma racing gloves & driving boots on the bed... To having to partake in some Go Karting with Jules Bianchi & friends. A Tin Top Driving Instructor named “Mean Jean!” (Alesi) Before supposedly harassing ‘Ol Man Johnny-be-Good... (Herbert) in some Single Seater action...

And speaking ‘bout Mean Jean’s instructing... If he thinks Alesi was bad? Then perhaps Messer Buxton should have read my take upon the mercurial Alesi falling foul to one of ‘Ol BlockHead’s (Gerhard Berger) numerous mischievous antics – way back in his Scuderia Ferrari days...

Bit-Berger
Posted by Tomaso at 3:45 PM