Vitor Meira chats with No Fenders 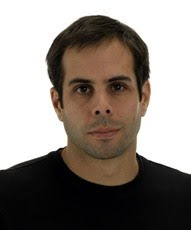 Perhaps it was an Omen of my being granted a very brief (10-15mins) interview with Vitor, eh?
2007 Barrett Jackson - ScottsdaleLast Wednesday (11/03) whilst seeking some lunchtime ambience, I stumbled upon Juan “O the countless SPEED Barrett Jackson airings... This time being the highlighted coverage of the 2007 Scottsdale Auction; as I tuned in “Just-in-Time” for the final moments of the episode as SPEED’s Mike Joy pined on - it was the very last car covered: A 1984 metallic silver Ferrari 512BBi. ($75,000 Hammer price) As it was noted that the vehicle was bought new by some ‘Ol Fart named ‘Super Tex... As Mike Joy noted that the seats were extremely worn, Err well used! While Bob Varsha noted that AJ Foyt had just celebrated his 72nd birthday... Before Matt Stone ‘Quipped how he just couldn’t see AJ in a Darn ‘Furr-ri; Hya!

And although I first noticed Vitor way back in ’04, when I seem to recall him slugging it out with Buddy Rice for the lead some where’s, (Kansas) obviously it’s NOT everyday I get the chance to talk One-on-One with the Brazilian Indy Car Driver... (HELL! It’s pretty DAMN RARE I get to speak to any of them at all!) And thus, at the appointed hour (Friday) - On-the-Dot my telephone rang... Mr. Tomaso please. Vitor’s on line One for you...

PREFACEAfter suffering two broken vertebrae in his lower back during a crash on lap 174 of the 2009 Indianapolis 500, Vitor Meira turned to the sport of triathlon as a means for rehabilitation to get him up to speed physically and back into his car. After being away from the sport for months, he bounced back in a major way, finishing the 2010 season in the top 15 overall.

Since getting back behind the wheel, Vitor has not given up on triathlons. In fact, on November 13th, he will take his triathlon training to one of the largest stages in the sport – the Foster Grant Ironman World Championship 70.3 in Clearwater, FL. Alongside more than 1,500 competitors, Vitor will compete against some of the best triathletes in the world while completing the 1.2 mile swim, 56 mile bike and 13.1 run. Quite the feat coming off such an injury!

Tomaso (T)Hello Vitor; thanks for taking my call...
Q) I heard on Autosport Radio (Tuesday 11/02) that you finished between TK (Tony Kanaan) & Bruno (Junqueira) in a recent Triathlon. Was that a tune-up for your upcoming Ironman competition?

(Vitor Meira (VM)Yeah, for TK & Bruno it was their main event. For me I basically used it as a tune-up for the upcoming Foster Grant Ironman World Championship 70.3 . I swam really hard, rode the bike hard, but took it a bit easy on the running which is the hardest part.

T) How do you feel your 2010 Indy Car season went overall?

VM) there were several Ups & Downs this year. As it was my first Full season with the Team, as I’d only done four races with them (A.J. Foyt Enterprises) before. So we had a lot to learn along with new Engineers, etc. But I feel we had some really good Oval races...

T) Will you be watching the Brazilian Grand Prix this weekend & have you raced there before?

VM) No, I’m watching it right now on the computer.

(How dare Vitor call me when Formula One’s on; Hya! As apparently somebody who’s use to going 230mph at The Speedway is apparently quite capable of Multi-tasking, Eh! As interestingly Lucas di Grassi would further prove racing drivers abilities as he toured Interlagos at speed whilst blathering away over his in-car radio for the benefits of the TV audience during practice...)

T) Are you a Rubens or Felipe fan?

VM) I like both of them & I’m friends wit both of them. I raced against Webber – so I like him and Jenson Button is a big Triathlon specialist. He also competed last week...

T) Larry Foyt just competed at Talladega. Do you have any aspirations of racing Pick-up Trucks like Nelson Piquet Jr. in the future?

VM) May be – but my aspirations for the time being are solely focused upon IndyCars. NO NASCAR, Sports Cars, etc. As hopefully I’ve still got many years left to go in IndyCar.

T) It looks like IndyCar.com has an old ’08 website under construction listed as your Official Driver link. Where can Fans go to get the latest info on you?

VM) the A.J. Foyt website is best. It’s my fault that the information isn’t up-to-date; but with the move from Panther Racing, my Indy accident, etc I just simply haven’t gotten around to updating it yet.

(As I was unaware that Vitor not only competes in grueling Triathlon’s – but is married and has a daughter, is an Ambassador for Special Olympics, has been awarded a Brazilian Ambassadorship - Not to mention dropping by the Autosport Radio Show occasionally...)
The Indycar.com has lots of good Historical information on it – like my biography, etc.

A.J. Foyt Enterprises – Official Racing website
T) And I don’t know if you’re considered an Oval/Road Course specialist, but how do you feel about racing at Edmonton and the event having just been cancelled?

VM) I really DON’T like racing at Edmonton. I like Toronto & racing in Canada, but just don’t enjoy Edmonton. It’s probably one of my worst tracks(?) It’s wide, bumpy, thin & fast. And I seem to constantly struggle with finding a decent chassis set-up. It’s also where you’ll see the biggest difference between Penske and Ganassi and the rest of the grid – like one second adrift! Obviously I’m NOT happy about what just happened to the event but like I said before I simply don’t like racing there...

(It’s worth noting that Edmonton was the ONLY Airport used as a temporary racing circuit this year and hence, I’m guessing it’s a whole different animal when it comes to chassis set-up, eh? As Vitor has absolutely NOTHING against Edmonton, just finds it to be a difficult circuit for him to race on...)
T) And lastly: Are you back in the No. 14 ABC Supplies Car next year

VM) Well it’s not confirmed yet and – its not 100% certain, but I’m hopeful and it’s looking positive right now.
(Vitor’s answer surprised me a bit – since I had NO idea what his current contract status was... Thus, I forgot to ask him my requisite ‘Super Tex question, i.e.; have you had any Chicken Fried steaks with A.J. lately; Hya!)
T) “Whale Otay,” (telling Vitor I could talk to him all day...) one last final Question: You said that you raced against Mark Webber, was that in Formula Three Sudamericana?

(Obviously Meira would be denoted as a “Twisty” Road Course-specialist, as I was totally unaware of his racing CV – not to mention his mixing it up with Ferrari F1 driver Felipe Massa in F3000...)
Vitor Meira – Career Highlights
Thanks again for taking time to talk to me and Good Luck next year...
As although I’ve never met Vitor in-person, he was the consummate Gentleman with Mwah and it was easy to see why he’s always a crowd favourite whenever I’ve listened to him being interviewed on Autosport Radio, as it was a total pleasure shooting-the-breeze with him!

Kudos to Jackie Schmader of Ketchum West/Ketchum Sports & Entertainment and Foster Grant Ironman World Championship 70.3 for making this interview possible!
Posted by Tomaso at 7:55 AM