Can another Racing Season already be over? 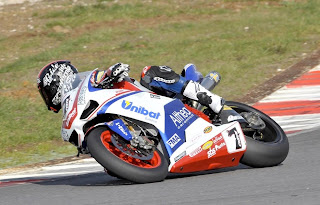 So it seems somewhat hard to realize another Racing Season has literally come to a close... As Autumn, Err Fall – or is ‘Dat Old Man Winter as its just been Snowin’ here in Seattle... With the cooler climes having taken over from those much warmer days ‘O summer; as Pigskins have replaced those multiple majik ring thingies and the IndyCar Season Finale in Homestead seems like a zillion years ago...

As I first had the thoughts above about how can it already be over? When watching the majority of the Penultimate (twin-races) round of the 2010 World Superbikes (WSBK) season way back on September 26th, which was fun to watch as my favourite WSBK rider Carlos “the Bull” Checa won both rounds in San Marino, Italy! This was especially refreshing as Race-1 saw a clean sweep of the Podium by Ducati riders, with Checa being followed home by an unknown rider to Mwah: Lorenzo Lanzi followed by a surprising finish from Nitro Nori, (Noriyuki Haga) taking the podium’s final step.

Race-2 saw Checa simply motor away whilst once again Noriyuki Haga put in another Gritty ride to be runner-up with none other then Cal Crutchlow third.

Thus what better place for Italian Massimiliano “Max” Biaggi to clinch his inaugural World Superbike Crown then on Home soil... As it seemed somewhat fitting that I’d earlier posted a picture of his zoomy Al Italia Aprilia RSV4 ‘Scooter, as I simply like its paint scheme... And I guess it ain’t too shabby of a Motorcycle either, eh?

The Doctor is Out! Aprilia Romps

Then in the season finale - Cal Crutchlow, who’s replacing Ben Spies at Tech 3 Twah Yamaha for the 2011 MOTO GP season, appropriately won round 1 before Max Biaggi claimed the series final race (round 2) and capped his Championship with his tenth victory, while ensuring Aprilia won the Manufacturer’s crown...

Of course this was before watching the IndyCar Season Finale from Homestead Speedway – Y’all remember ‘Dat? As October 2nd seems like a long time ago... As the results basically took the wind outta my sails, since I was so intently hoping for the “Toowoomba Toranadoe,” nee Will Power to capture his inaugural Indy Car Series Crown, which wasn’t to be. (Nor did my other ‘Aussie Mr. Shrimp Barbie Webber seal the deal either...) As Dario “REO Speedwagon” claimed his third Championship and took home the Naked Man on a Unicycle Champion’s trophy.

And it seemed pretty weird sitting down to watch the Penultimate round of the MotoGP Championship and see “Cap’t kOOL!” (Ben Spies) crash out on the “Sighting” lap, (Parade lap) crashing hard and dislocating his left ankle; unable to start the race! (As I don’t even remember who won?)

Then after the disappointing Brazilian Grand Prix outcome – which I guess turned out to be a good thing for Master ‘Zebb, eh? I watched with amusement as three MotoGP World Champions battled for victory in the Season Finale at Valencia. As brand new Diamond-encrusted World Champion George Lorenzo ran down Casey Stoner for his ninth victory of the season, with Stoner runner-up and The Doctor, a.k.a. Valentino Rossi third.

I say Diamond-encrusted as Lorenzo was sporting a snazzy new glistening helmet glittering in the sunlight – as the $12k crash bucket was festooned with real diamonds! Which I guess was fitting as it was Lorenzo’s inaugural victory in Spain – further punctuated by his record setting 383 point tally.

Of course the racing universe righted itself by Sebastian Vettel claiming his fifth W of the year enroute to becoming the sports youngest ever World Champion... And now its time for a winter’s slumber, eh?
Posted by Tomaso at 9:00 AM