Sebastian: You are World Champion! Can you confirm that, please... 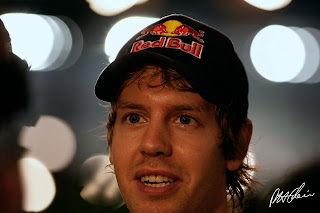 As I kept my vociferous Yelping at 6:47AM to a minimum in order to not startle my upstairs neighbors... As I simply couldn't believe it! As Sebastian Vettel led virtually wire-to-wire and Ferdi-the-Putz (Fernando Alonso) in his vastly superior Ferrari couldn't find his way 'round Russian Rookie Vitaly Petrov's Renault; SHEISA-SHEISA-SHEISA!!!

As thanks to Mary Ellen; who'd previously asked; you are gonna get up at 4:30AM & watch the race, right? It was all I could do to contain myself as the jubilation spread over my body! As I found it ironic how I’d stayed up into the wee hours of the night way back when watching Herr Schumacher win his very first World Championship in Adelaide some 16yrs ago...

Thus, I was simply Dumbstruck that Alonso, who’d seemed a sure winner – walloped home in a lowly seventh place! As surely “Deeter Majestic” was grinningly croonin’ his favourite theme song; Frank Sinatra’s - I did it MY way...

Especially after I along with many media types had been decrying Red Bull's stupidity for not making Vettel move over in Brazil in order to help Zebb's teammate Mark Webber potentially clinch his 1st drivers title; as he'd have been 1-point behind Point leader Alonso instead of 8 this morning... (Yet today’s race results would have seen Alonso as World Champion over Webber, who finished P7-8 respectively...)

But DON'T be callin' him "Baby Schu!" As Vettel has just become the sport's YOUNGEST ever World Champion at 23yrs & 167(?) days, having eclipsed the current record holder Lewis Hamilton...

Interestingly Vettel gave a Shout-out to not only his hometown of Heppenheim - but Kerpen from his Karting days... As in the same Kerpen as where Der ‘Vurld de Schumi is! As in the Michael Schumacher Go Karting Centre. (Albeit I believe I’ve heard that Herr Schumacher isn’t involved anymore?) You can check out a brief review in: Ferrari Owners Club members visit Scheuy Karting centre...
But all I can say is: SIMPLY FUCKING AWESOME!!!
As Vettel's Post Race interview was even sweeter... Saying why was my (race) engineer talking to me so much over the last 10-laps; it must be looking good?

BOO HOO HOO FERDI! - CONGRATS SEBASTIAN: YOU'RE FASTER THEN ALONSO!!!
Posted by Tomaso at 9:30 AM