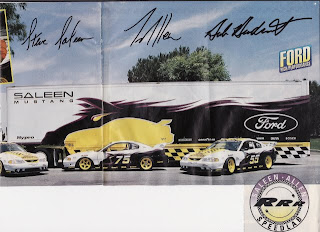 Whale Otay, originally I was gonna try poondin’ this out way back in September... But alas, it’s been trapped in the No Fenders Wormhole Vortex; CRIKEYS! That sure is a crowded space, eh?
Thus, while Y’all are bein’ Patriotic – as after all it is Election Day... What better timing then today to post this story with that Oh, so clever title...

Thus having finally worn out my first white cane, which broke on me during my trek to Indy for the MotoGP race, by shear luck, the one Saturday of the month that CSBPS (Community Services for the Blind and Partially Sighted) was open just happened to be Sept. 11th. Thus I hastily took the bus over to acquire a new walking instrument that has become vital to my mobility...

Picking up passengers, the visually impaired woman with Guide Dog who rides the bus got on and the driver politely informed her about the days service re-routes due to the Car Show; Huh? Wonder what that’s all about? To which I inquired with the bus driver when departing – as he seemed very friendly, and he gave me perfect directions... By verbally telling me how to get there vs. simply pointing; and thus I felt it was my lucky day, since not only was the sun out, but by pure luck, it was a gaggle ‘O Mustangs; as Mustangs Northwest was the club that had been pressed into service for the Northgate Festival – which I’d never heard of before...

So I walked up to the booth and asked for the low down, and had a very pleasant chat with Ned ‘Something-ruther... As the theme from Groundhog Day played in my head when Bill Murray keeps running into Ned Flanders? (Insurance Salesman)

Thus I told Ned ‘bout my past Mustang, a ratty looking, well worn ’69 Mach 1, to which Ned replied; “It’d be worth a fortune today...” (NOT!) As I told him how my friends in the older Shelby Club had snuck out and positioned the BEATER FORD sign directly in front of my ‘Stang as I worked the Information booth for the inaugural Kent Canterbury Faire Car Show tallying the Popular Choice votes... (Thanks Dean!) As some where’s in my clutter I’ve got a photo of this spoof... 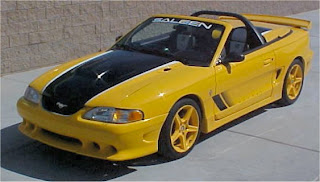 Asking Ned if he had a car present? Ned said Yeah mines the yellow Saleen Convertible. Going on to explain that it was only 1 of 15 produced that year and that he’d been fortunate to win the prospect of acquiring it thru a lottery Saleen Performance Inc. had held... As I’ve already forgotten what year it was?

Thus I’ve just spent awhile snooping ‘round that all knowing entity, the Google MONSTER! And was surprised to learn from WICKEDpedia that Steve Saleen left the company back in 2007, before the company was auctioned off in pieces... As this sounds a bit like Fords antics with the Master himself - ‘Ol Shel (Carroll Shelby) who lost control of his company a long time ago before starting up his current venture in Los Vegas...

This came as a bit of a shock to Mwah, as I cannot recount how many years in-a-row at BCC’s (Bellevue Community College) NMustangs RoundUp Show I stood in line to acquire his autograph – with several posters rolled-up in tubes. While I’ve also kept the cut-out magazine picture of the Tim Allen forged racing team in conjunction with Steve Saleen for some blinkin’ 17yrs; Aye Karumba! Although my favourite Saleen Mustang Racecar was the giant wild stallion theme ‘Stangs that attacked the Circuit de la Sarthe way back in 1997...

Thus the Saleen saga is even more convoluted then I with to try explaining, but fortunately Steve & Co. have set up a new enterprise in Corona, CA named SMS Supercars.

SMS Supercars pulls the wraps off 2011 302 Mustang
While perusing ze internets, I also learned that Ned’s chariot was a 1998 SA-15 Convertible, hence the miniscule production lot of 15 chassis that were apparently offered thru the SOEC (Saleen Owners Enthusiast Club) to prospective buyers. As it also claims that the SA-15 was the first Factory built S281 with Supercharger, and Uh Duh! It’s a very pretty car in the buff... Especially on a sunny day! SWEET – NED!

There was a small gathering of the original Mustangs, circa 1960’s along with a small armada of Saleen’s and late model ‘Stangs. Have Y’all noticed how the new ‘Stang’s closely resemble the 1969-70 Fastback models...

And with my newly acquired white cane in hand I gravitated towards a group of three Gentlemen doing their best Tim Allen impersonations, chattering on ‘bout 465 cubic inch blown superchargers, etc. Admiring the nearby Mustangs, I knew the sunshine was playing tricks upon me, that ‘Stang can’t be fuchsia! So I waited for a lull in the conversation and asked: “Can I ask Y’all a silly question?” To which they sheepishly replied: “Depends upon the question?” Telling them I was “Visually Challenged” I inquired if the trio could decyper the cars colour? To which I naturally got three different answers. Oh, it’s black; no, it’s a dark grey, or is it a deep charcoal gray? Thanking them I walked around all of the Mustangs a second time before traipsing back to the Transit Centre to catch my Metro bus home, awash in the afterglow of a most enjoyable extremely low key Car Show! 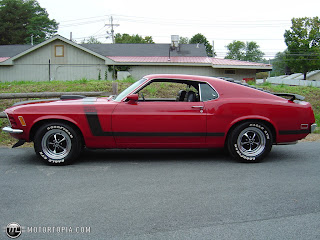 And continuing on with the Saleen-Mustang-Shelby theme, a few weeks (9/26) after my very enjoyable outing at Northgate – I dropped into the never ending Non-stop SPEED Wall-to-Wall 427hrs of Barrett Jackson Auction coverage... This time coming from ‘Los Wages, i.e.; Las Vegas, NV; where I ‘Karmically spotted a BOSS 302 On-the-Block... It was Lot No. 629.1, a white 1970 Ford Mustang Boss 302 – replete with hood mounted Tachometer, which SPEED’s Mike Joy pointed out how antiquated it looked by today’s standards... But the idea was that the BOSS’s driver would be able to look ahead and keep his eyes fixed upon the “Ash-fault” instead of buried in the dashes recessed console. Of which I can tell you from personal experience that I could NEVER once read either the “Tach” or Speedometer in my Mach 1 that the BOSS was based off of...

The car seemed to stall at $60k before the Auctioneer managed to move the needle to a final Hammer price of $70,000.

Then I had to stick around for the next “Fiord” product, a “1965 Cobra 427,” which was actually one of the somewhat controversial Carroll Shelby “Continuation Cars;” this ‘Juan being a CSX4000 Roadster, sprayed in “Rosso” (Red) with the legendary twin LeMans stripes in white. This I’d discovered was actually CSX4830 which my quickly scribbled notes said: X-Cubes, (482) 555bhp! Tremac 5-speed (transmission) and didn’t mention Hammer price... To which now I’ve discovered that it was a take-off on ‘Ol Carroll’s venerable 427 Cobra, albeit motivated by a Roush/Yates engine...

But the Vegas Auction’s High seller was bought by none other then Barrett Jackson co-founder Steve Jackson, who doled out 700-large )$700,000) for a Bugatti Veyron that the buyer couldn’t pay, while the car’s previous owner reportedly plunked down $100k for a VW Microbus – go figure...
Posted by Tomaso at 9:22 AM