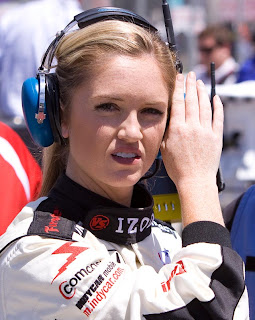 Welcome to the year Twenty-eleven and Happy New Year’s Y’all!

As now that I think – Think Pink! The Christmas lights have been returned to their boxes and the petrol-fried, Err petrified trees have been discarded? I’m gonna throw a few Bones out – which are in NO way intended to set a FUNK towards the overly fast approaching Two thousand-eleven racing season...

Just a few things I’ve been sitting on until the Holiday Season was over, the last of Ye Eggnogg was downed and the final slivers ‘O Holdazes Fudge was consumed, eh?
Bone-1
Thus, sounding like a broken record... Especially since I believe I’d commented on it befores, albeit I cannot seem to locate said Post; ‘nor definitely (NOT!) being as eloquent as Geo. Phillips...

But have Y’all ever tried to disseminate the Overall Indy Car winners tally totals... As it’s about as clear as mud on a rainy day! Since the Indy Racing League, which I used to call the inDEE Retirement league – Yoose knows when all of the ‘Washed-up CART Starz bolted for the greener (Dinero) pastures of Ronnie Georges rival ALL Oval racin’ series; OOPS! ‘Dat sure was a long time ago, eh?

Yet, since Randy “where’s-duh-Beef” Bernard has declared the Open Wheel Racing Series to henceforth be known as IndyCar – will you pleas for the LUV ‘O Chump Carz fix your stinkin’ Historical records – instead of continuing to admonish the CART/Champ Car drivers for having raced there previous to the IRL! As I believe that CART NEVER did this, since I’ve always understood since becoming a dedicated Fan (participant) nearly one-quarter century ago; YIKES! That the following USAC driver’s rooled the roost for overall victories in the Championship Auto Racing Teams record books...

1979-2010
(Rank/Driver/Wins)
1. A.J. Foyt 67
2. Mario Andretti 52
3. Michael Andretti 42
4. Al Unser 38
5. Sebastian Bourdais 31
5. Paul Tracy 31
5. Al Unser, Jr 31
8. Bobby Unser 29
9. Rick Mears 28
10. Rodger Ward 27
11. Dario Franchitti 26
12. Ralph DePalma 25
12. Scott Dixon 25*
12. Johnny Rutherford 25
15. Bobby Rahal 24
16. Jimmy Bryan 23
16. Emerson Fittipaldi 23
16. Gordon Johncock 23
16. Tommy Milton 23
20. Tony Bettenhausen 21
20. Earl Cooper 21
22. Helio Castroneves 19
22. Ralph Mulford 19
24. Danny Sullivan 17
25. Alex Zanardi 15
26. Tony Kanaan 14
NOTE
This list was simply compiled by myself from some old statistics floating around in the No Fenders Archives – Circa ’05; having NO idea where I found it upon ze internets... Therefore, it’s definitely NOT official by any means. (Use at your own risk...)
Scott Dixon*; Don’t know/think that his current indicated wins tally of 24 includes his lone 2001 Nazareth, PA CART victory...
Bone-2
Although I know I should resist the temptations ‘O commenting towards this, nevertheless – it’s been drivin’ me a ‘Wee bit crazy... As ‘Juan Blogger mentioned late last year how all of the Bloggeratzi had quit bloggin’ now that the IndyCar season was over... HERROE? I posted stories ALL the way up to Christmas Eve – Even if they’d been percolatin’ awhiles in the No Fenders story hopper, eh?
Since if there’s anything I do too MUCH of... It’s spending copious amounts ‘O time poondin’ awaze on meeze keebords... Err, getting’ mize nucel’s BLOODY whilst scribblin’ meeze heartz ‘N eyeballz away! As an official card carryin’ member of the now defunct United Open Wheel Word butcher’s Association. (Not to mention having to reformat this 'N other posts; Thanxs Blogger!)
And that’s not to mention how I also kinda feel like a new Split is occurring in Bloggerland? As it seems you’re either an IRL Blogger, Uhm? IndyCar bloghead or an Open Wheel Blogger; Hmm? What’s that ‘Ol saying ‘bout sometimes Yuhs feels like a NUT; sometimes Yoose DON’T; Hya!
Thus, being ‘Juan of the latter, hence one receives way less coverage upon the Blogosphere – even dare I say it? Being left outta weekly compilingz ‘O Indy Car lore... As yeah, I know; I’m breaking rule No. 2 of the Four Secrets by taking this personally... so; Here’s My Sign, Eh! (As there – I finally let it go...)
Bone-3
And I really know I should just finally let go of this ‘Juan too, especially since Randy “The CandyMann” Bernard is tryin’ to instill an ALL sunshine policy (NOT to be Cornfuzed with the DannaWho Rainbowz ‘N Bunnies World Tour...) as in: Who can make the IndyCarLand Zoom-Zoom again; Randy CAN!
BUTT - Psst... Here’s an idea Mr. Bernard. If you truly wish to recover those 15-20 million Fans you lost during The Split... Then by all means QUIT punishing Portland and the Northwest for having been such devoted CART/Champ Car Fans and bring a FREAKIN’ race back to Portland International Raceway! Of course you’ll haveda start some sorta new marketing ploy, now that you’ve given PIR’s traditional Father’s Day race weekend date away to Ahem... A Midwest track that traditionally draws a SMALLER audience then Portland did during its Heydays...
As in case Yuhs can’t guess? I’m a bit partial to my Hometrack of some 20-years being given what I consider the Cold Shoulder... As I just DON’T get it; Yuh’s mean’s to tell me the Pacific Northwest AIN’T a desirable market? Oh Whale – Never Mind!
Hey IndyCar – I think Portland’s still available...
Bone-4
For all of those Hosers Up North Eh! Especially that fine ‘KuhNaidiun Lass Meesh – would somebody step up to the plate and give Messer chrome Horn – The Thrill from the West Hill, a.k.a. Paul Tracy a Fulltime ride in 2011, so we can see ‘Ol PT go out in a blaze ‘O glory, eh?

And for IndyCarz sakes – please QUIT clowning ‘round and confirm the return of Edmonton, will Yuhs! As it’s apparently become my new Hometrack and I’d like to purchase my ticket in the track’s new configuration...
Bone-5
And lastly, whilst some think the replacing of Bob Jenkins by LyndieCar for the Versus IZOD IndyCar Central Pre-race show is a good thing; Hmm? Lindy Thackston or Mr. Oldie – wonder which’s easier on the eyes, eh? Hey! Mr. Jenkins did host a Golden Oldies show; 1950-1960’s show on Radio Brownsburg last year...

But just do me ‘Juan BIG favour Versus... QUIT tryin’ to replicate RASSCAR with a 1:43hrs LONG Preamble... Preferably just make it a consistent half-hour Preview show, or otherwise at least tell us when the race will start so we DON’T haveda be tortured by the starts coming up in just minutes, really, honest...

And hey, if The Wanderin’ Milka isn’t gonna be out on the track this year... Why not make her the ‘Ofical Post-race winner’s interviewer? And Yuhs could even call it the CITGO Winners Circles Show – all in the name of Commercialism... Or perhaps Versus could give Milkalicious her own TV show? Hey, if they can have Mouth ‘N Mouthier doin’ a 30min talk show – as in the T’OuchOe Show, then why NOT Milka!
Posted by Tomaso at 9:00 AM