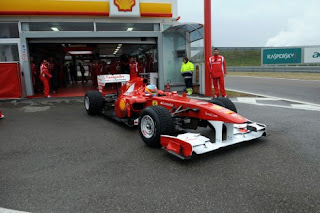 So once again, it’s time to launch the Formula 1 Balloons, Err roll out the various Twenty-eleven new car models. In typical fashion, La Scuderia got the party rolling – by being the first to unveil their 2011 challenger, the F150 – bright ‘N early last Friday in Maranello; as the Tipo 150 designation is to commemorate Italy’s Unification 150-years ago - and nothing to do with Luca di Montezemolo’s political aspirations...

Below is a list I’ve compiled for the various F1 Constructors, as I’m most intrigued to see what Hispania’s Cosmic Rocket will look like – having given Hollywood stylist Daniel Simon Freewill to work his magic upon a blank canvas...

Hispania looks for some Hollywood style

UPDATE
Whale – so much for my vaunted sources, eh? After posting this Y’all probably know I made some Boo-Boo’s... As Red Bull & Mercedes launched their new 2011 F1 Challengers earlier then expected, whilst I believe the Williams chassis is currently sporting an interim livery in order to get more Bang-for-their-Buck with another launching ceremony on February 13th in Valencia...

Team Lotus 2.0 ratcheted up the ongoing legal squabble by deciding to denote their new racecar in Lotus style numerology as the T-128 instead of the TL11 as previously noted...

And thus, I believe there are now only four new car launches left on the upcoming calendar, while I’m still hoping for something outta this world from Hispania...
Posted by Tomaso at 8:34 AM