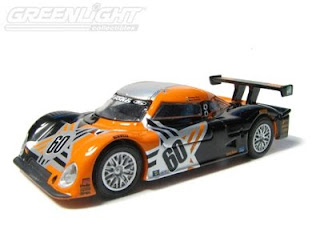 HURRAH! It’s time to go racing, as this year’s Daytona 24hrs race is set to kick off in just over ‘Juan-day from now. As qualifying has already been held and as always, the Daytona Endurance race brings out a gala of racin’ Starz – spanning the gambit from Formula 1, IndyCar (OH CRAP! I FORGOT TO GO ALL CAPS...) ‘RASSCAR & Sports Cars... As here’s a look at just some of the competitors in this year’s event.

Level 5 Motorsports
First out of the Chute to announce their 2011 driver lineup were the ‘lil Level-5 Boyz – quickly snapping up the services of dispatched De Ferran Dragon IndyCar Piloto ‘RAFA, nee Rafael Matos, with Sports Car Ace Luis Diaz also in the mix.

The team will run a brace of BMW-Riley Daytona Prototypes (DP) and could be a force to reckon with, whilst Thanxs to ‘Ponches IndyCar Roster for Rolex 24 story, I now know that Ryan “The EX-IZOD DUDE” Hunter-Reay will also be part of the teams driver line-up. Yet for reasons unknown, neither racecar took part in qualifying...

Cheep’s All Star Line-up Confirmed
Not surprisingly – The ‘Cheepster, a.k.a Chip Ganassi will once again field an All Star line-up for his brace of Riley-BMW DP racecars, as newest IndyCar signing – The Graminator (G. Rahal) joins proverbial Sports Car Champion ‘Scooter, (Scott Pruett) Memo Rojas and Joey Hand in the No. 01 Chip Ganassi Racing with Felix Sabates (FS) Target-TelMex entry.

HOLY ALPHABET SOUP BATMAN!
GEEZ CHIP! Are Yooze tryin’ to secure the whol alphabet too with your Team/Sponsor/Car/Entries?

And although Pruett claimed they weren’t shooting for top speed honours during The Roar before Daytona 3-day practice session, both Scooter’s and the ‘Seester-car with Scott Dixon topped their respective Timesheets during various practice segments, with Pruett’s car qualifying third and Dixon’s mount starting P5...

Starworks Seeing Stars?
Defending Rolex 24 winner and former Champ Car driver Ryan Dalziel set the unofficial track record on the final day’s testing by blistering the course with a lap over 128mph. Dalziel, along with ex-Formula One/Indy Racing League Ace Tomas Enge is part of the two car Riley-Ford DP lineup for Starworks Motorsports, as the Scotsman (Dalziel) was the meat in a TelMex sandwich during qualifying with a fourth place finish...

Bubble Roof for Michael Shank Racing?
Couldn’t resist, as Justin BIG UNIT Wilson’s inclusion in the No. 6 Mike Shank Racing with Curb/Agajanian; Hmm? Weren’t those Old Indy Racing League team owners? Err; Wilson’s height made me flashback to those Ford GT-40 Dazes with a bubble roof canopy to help a lanky driver by the name of Dan Gurney fit comfortably inside...

The Jimmy Show
He’s back.... So get ready once again to hear constant Princess ‘Round-the-Clock type media coverage of Jimmy Johnson’s every BLINKIN’ move... NO – NOT that Jimmy Johnson who was just on Survivor and has lengthened his TV career as a pitchman for Extenz... Nope, its 5-time RASSCAR champ Jimmy Johnson who’ll be moonlightin’ once again with the Bob Stalling Boyz of Alex Gurney & John “On-the-Bayou” Foggerty. While I’m guessing JV’s – as in Jimmy Vasser is back again as co-driver? Hmm? Wonder if the Stalling Gang gets a discount for Bodywork repairs at KVRT; Hya!

Action Jackson’s Answer to CGRw/FS
Defending Overall Rolex 24 victors Action Express Racing have said Oh Yeah to The Cheepster – We can do that two! And have brought their own 2-car All Star driver cast, featuring seven previous Overall Rolex 24 winners.

While the No. 5 Riley-Porsche/ Cayenne V8 DP has David Donohue,
Darren Law, Buddy “Hot rod” Rice and Burt Frisselle at its keyboard.

Apparently IZOD’s now Everywhere!
Also according to Mr. CHiP’s (Chris Estrada) Ryan “The New IZOD Dude” Briscoe will be part of the No. 10 suntrust driver line-up, as Briscoe will share the Dallara-Chevrolet DP’s cockpit with Max “THE AX!” Angelelli and the father-son duo of Ricky Taylor & Wayne Taylor – the team’s owner...

And for some strange reason – Claxon Bells started ringin’ in my head when I read Zackery Brown’s name. As in that cannot be the same Zak Brown whose Tony George’s Drinkin’ buddy, eh?

Reportedly the quartet will be piloting a Riley-ford Daytona Prototype under the assistance of Michael Shank Racing, as I’m assuming its one of MSR’s older racecars? (Actually I’ve now learned it’s the third MSR entry this year...)

Yet wouldn’t it be funny if the BRIT Duo ‘O Brundle & Blundell upset Chip Ganassi? And won the whole BLOODY thing... Hmm? I just realized there’s three Mark’s on the team – so may be I should call it the Mark Brotherz Project instead?

You can check out 14hrs of live ‘round the clock coverage via SPEED beginning Saturday, January 29th at High Noon (12PM) PACIFIC – as ALWAYS; check your local listings...

This is the car I’d like to see WIN the race – even if ‘WallDinger DEFECTED to ‘RASSCAR! As I cannot think of two more deserving drivers then Justin ‘N A.J. who are due for a career highlight moment! Hmm? AIN’T McDowell the dude who was the very first driver to test out the Car Of Tomorrow’s (COT) roof structure ‘N roolbar by Barrel rollin’ Mikey “Ah Shucks” Waltrip’s Double Zero Toy Yoter at Daytona International Speedway?

NOTES
And it AIN’T all Sunshine ‘N Roses over in FenderLand either... As it must mean something if AIM & Godstone Ranch/Dyson Racing both of the Daytona Prototype class decide to skip the series marquee event, eh? (Can you say Cash Crunch?)
Posted by Tomaso at 9:52 AM