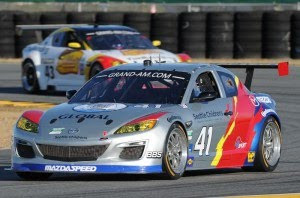 Just cannot seem to stay away from BloggerLand, le internetz or the Newswires... Although I’m a bit embarrassed that none of my local media seems to have picked up on the story – that ‘Mega Hollywood Hunk ‘N Star of Grey's Anatomy, actor Patrick Dempsey will once again be flying the Team Seattle flag in this weekend’s Rolex 24.

Dempsey, who’ll once again be part of his team’s No. 40 Mazda RX8 in the GT class – with two Mazda RX8’s entered in the lower class (No’s 40 & 41) is running his own personal 24hrs marathon ‘O sorts prior to the races start, as he’ll be flying back ‘N forth from the Sundance Film Festival where his latest flick is debuting.

Oh? You haven’t heard of it? It’s titled Flypaper and co-stars somebody the Blogosphere likes to call Mrs. Dashley, a.k.a. Ashley Judd – and there’s even reportedly a kissing scene in the movie; How ‘bout that Dario...

Actor gets serious about racing

And for its 14th year, Team Seattle will once again be running laps around the DayToner High Banks for the Seattle Children’s Hospital, which you can learn more about by clicking here.

Notes
KV Racing Technology IndyCar driver E.J. “What; Me Worry?” Viso has been added at the last moment (Friday) to the Starworks Motorsports third Daytona Prototype entry; the No. 2 Riley-Ford...