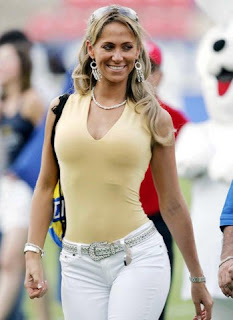 Just a few quick updates from last night’s Stage 1 TV highlights...
Whale, I think I know where Milkalicious is... After having watched the first installment of Versus’s DAKAR 2011 coverage last night. I think she’s on assignment making her television debut as a roving reporter on location for the Versus Behind-the-Scenes segments; Hya! Otay; NO disrespect to Milka, Err Mrs. Sainz – who Robby ‘Purple Floyd said is NO relation to Carlos Sainz. As perhaps it’s just me? BUTT! Why does Versus’s show strike me as a Spinoff of SPIKE TV’s Champ Car broadcasts? (Which weren’t very good if Y’all recall, eh?) As they tried a behind-the-scenes segment with first Mrs. TAG, (Bronte Tagliani) and later some blonde named Michelle something-ruther? As all we need now is for El Charo to show up with some number double-ought hand towels – Oh Never Mind!

And I’m equally BUMMED they’ve replaced Toby Moody with some new guy from Eurosport. (Who unfortunately I couldn’t even hazard a guess at his name...) so overall – while immensely disappointed by the New & Improved Versus Dakar show - at least I’ll be able to once again follow the Rally daily, which is more then I can say for the FIA World Rally Championship, eh? Since I still think Versus would be smart to grab this “Niche” market, which features Ken Block and Kimi Raikkonen, and return the WRC to North American households...

If Versus was Smart
Meanwhile, Mr. Eurosport claimed that contrary to many reports, Robby Gordon’s Hummer isn’t running 4WD for the first time, instead soldiering on in its familiar 2WD variant; which having been caught in the midst of a thunderstorm – forced Robby to slither his way to the end of the first Day’s stage in P8, some Ten-plus minutes behind...

Mr. Eurosport (sorry Dude...) also noted that Jonah Street, who finished sixth on Day-1, had finished ahead of all of the “Works” Yamaha’s – which I guess means Jonah’s just riding a “Semi-works” bike, eh?

And VW’s Mark Miller finished fourth overall, just a tick over four and one-quarter minutes behind leader Sainz. While Quinn Cody was a very respectable 13th in his Debutant Dakar stage outing. You can tune into Versus TV coverage again today, with multiple broadcast airings – so check your local listings...

And it really strikes me as ODD/SAD! If this is indeed the very same Mrs. Sainz who gained her 15 MyNutes ‘O Fame last September in the NY Jet’s locker room? As how many female Latin reporters can their be with this name?

If this is correct? As I’m Assuming it is... Then I’m really disappointed by Versus’s going on the cheap ‘N tawdry FOX route!
Ines Sainz, TV Reporter, Allegedly Harassed by Jets
Posted by Tomaso at 10:53 AM