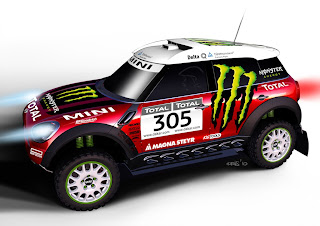 So it’s time once again to ring in the New Year by poundin’ Over-the-Hills and Thru-the-Camel Grass from Buenos Aires to Chile ‘N Back in a blistering 15-day trek, when some several hundred competitors – as in 430 kicked off the Rally ‘O ALL Rallies on New Year’s Day with what I thought was billed as a non-timed “Ceremonial” Stage in order for spectators to view the armada of two, four ‘N more wheeled racing machinery, before getting down to business on January 2nd when the racing begins in earnest. Yet, there were times handed out on Stage-1 with both of last year’s champion’s heading the Time-sheets.

As far as I can tell by my very non-scientific methods – there’ll be at least four ‘Yank’s contesting this year’s event; (not including navigators/support crews, etc) as the 33rd running of the DAKAR encompasses some 5,900+ miles of torturous landscapes – with apparently two American’s in the Bikes & Cars categories respectively.

Northwest local Homeboy rider Jonah Street (Ellensburg, WA) once again tackles the two-wheel category. As this year Street will be supposedly riding a factory “Works” Yamaha WR450F decked out in Dakar-trim, as Jonah won the Mongolia Rally Raid in convincing style on his first outing on the new 4-stroke 450cc ‘Scooter.

Meanwhile, I’ve just discovered a new addition to this year’s Bike class; as Honda will have American Quinn Cody, apparently a “BaJah” (Baja) specialist making his Dakar debut. As this year’s event will be won outright by a 450cc Scooter, with seven makes in the mix: KTM; Yamaha; Aprilia; Honda; BMW; Beta. (Don’t know that ‘Juan...) and Kawasaki? (As I can only find six Manufacturers - listed...)

Yet, most likely they’ll all be chasing the KTM Duo of Marc Coma and Cyril Despres who’ve won the Dakar the past five-years running, while KTM has won the last nine events in-a-row...
DAKAR 2011: Bike Preview
Robby Gordon will once again spearhead the charge for his Team “Humdinger” entry, as Gordon will bring two trucks again to the Dakar, in hopes of taming the rally that’s been extraordinarily harsh upon his Hummer’s, with Robby in the No. 303 entry and multiple internets sources leaking during the final week of December, that reputedly former F1 and IndyCar driver “Ellio Salad-bar” (Eliseo Salazar) would be piloting the second Robby Gordon Motorsports No. 327 entry. And apparently with Scrutineering now underway, Salazar’s name has been officially divulged by Gordon’s team; ironically Robby and Eliseo were teammates at A.J. Foyt for the 2001 Indy 500...

Volkswagen interview with Carlos Sainz
Yet Sainz will once again face fierce competition from within his Volkswagen teammates; recall Nasser Al-Attiyah’s extremely close fought duel with Carlos last year, as the two VW drivers tossed the lead back ‘N forth almost daily... Not to mention Miller wishing to move up two steps upon the podium.

Then there’s Dakar Master Stephane Peterhansel in the BMW camp looking to make up for last year’s disappointment, as the X3 was probably the quickest vehicle in the Car-category, before Peterhansel suffered a broken Driveshaft while leading thru Stage 5.

Of interest will be the all new BMW Mini All4 Rally Car making its Dakar debut, as driver Guerlain Chicherit and co-driver Michel Perin completed two days of testing in France on Dec 13-14, in preparations for the upcoming Dakar challenge. Chicherit finished fifth overall last year in the BMW X3...
Strong Car field awaits start of 2011 Dakar
And I’m assuming that Versus coverage will once again be anchored by Robby ‘Purple Floyd – with Toby Moody on the ground, as you can catch daily recap shows, which all I could find via my TV Guide listings was a late-nite airing of 9PM (PACIFIC) tonight. (January 2nd) As ALWAYS! Check your local listings...
Posted by Tomaso at 9:34 AM