Lennon’s Vroom-Vroom Ferrari Up for Grabs 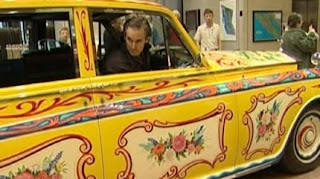 Just heard the news today,
That the English had won the war...

Err, that the late John Lennon’s GO FAST-Mobile, a 1965 Ferrari 330 GT 2+2 coupe is slated to go on the Auction block this February in Gay ‘Paree during Bonhams' Paris auction being held at the Grand Palais. (February 5th)

Reportedly, this was the very first automobile that Messer Lennon purchased – to celebrate passing his British Drivers license test. Talk ‘bout passing the audition, eh? As reputedly Lennon forked over $3,119 smackeroos for the light blue ‘Furr-rari.

Yet the Ferrari GT Coupe is only expected to fetch ‘bout one-tenth the amount his Psychedelic Rolls Royce stretch-limousine did... Hmm? And to think I actually saw that limo way back ‘Dar at the Vancouver Expo – Circa ’86; CRIKEYS!

John Lennon's Ferrari Goes to Auction
Posted by Tomaso at 9:17 AM