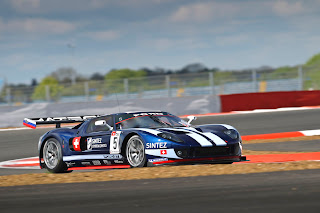 
While the Indy Car media is still awash in ‘DannaWho’s resplendent return to leading Diva status... And Simona-Simona (De Silvestro) continues to show her amazing resilience after her Texas Barbeque fiasco... Upon watching the Saturday morning portion of SPEED’s Le Mans 24hr race coverage, I managed to catch Andrew Marriott doing a “Bit” about the all Swiss trio of Femme Fatales driving the No. 61 Ford GT.

And although I’d earlier recognized ex-FIL competitor Cyndie Allemann listed as one of the Matech Competition’s LMGT1 pilot’s, I was unaware that the Team had opted for the all Swiss female driving trio, which also features Rahel Frey and Natacha Gachnang.

Even more impressive is the fact that Gachnang is hobbling around the Pits on crutches after breaking her leg in a nasty accident earlier this year. Ironically the 22yr old Natacha’s cousin is Scuderia Toro Rosso F1 racer Sebastian Buemi, and she broke her leg in two places at the Yas Island circuit on the same day as Buemi was enduring his massive double Front wheel failure in Shanghai!

Then Messer Marriott elaborated on the fact that ten Females had contested Le Mans way back in 1935 to which Leigh Diffey quickly quipped; were you at that race Andrew? To which the elder Marriott replied over the guffawing that he could report that nine of the ten ladies were from Britain driving MG’s...