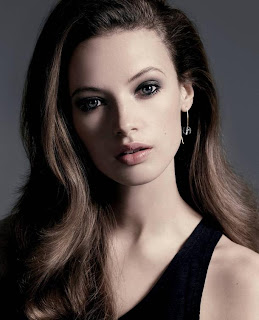 Early Tuesday morning (May 11th) Tanja and I left to go to her work at the Horse Stables in order to reduce our driving time to that afternoon’s adventure, the sleepy little town of Anderstorp...

As I stood outside the stables with my newly commissioned “Guide dog” Lily, a rider on Horseback approached and cheerfully said Hey-Hey (Hello) to me... Hmm? Who could it be? Thus a little later on I inquired to whom was riding the horse in the training rink below. Oh that was Mona... Do you want to meet her?

So we walked down to the lone rider who appeared to be dressed all in white riding garb and she sauntered over to us on a beautiful black filly named Donna and next thing I knew I was talking to Swedish Supermodel Mona Johanesson; SHEISA! As after exchanging pleasantries the two women began discussing horses...

Then it was time to depart for our day’s trek to Anderstorp, which the Confuzer had told us was a two hour drive, which in turn was a pleasant drive thru the gently rolling countryside landscape which reminded me of the Pacific Northwest. And even with the treacherous 9.4km section of Prying Eyes, nee cameras mounted on poles... As these all seeing camera eyes are sprinkled ALL over the country; and have a nasty habit of taking your picture when potentially exceeding the posted speed limit... Ask “Johnny ‘O ‘bout that!” (Johnny O’Connell; Corvette Racing) Nevertheless, we arrived in only 1.5hrs as Tanja spotted a sign saying Motorbahn and headed directly for it.

Upon entering the driveway there were a multitude of pictured individual’s on poles as I was asked ‘Who’s Dat? That’s Niki Lauda isn’t it? And there’s “The Wee Scot,” Sir Jackie, (Stewart) looking very cool in his trademark shades (sunglasses) and “EMMO” mutton-chops of what I’m guessing was an early 1970’s picture. (’73?) 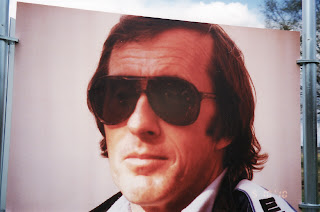 Jackie Stewart
Thus we’d stumbled upon some place called Scandinavian Raceway on the very first attempt... As I’ll let Y’all naw upon that? As some of Yuhs Diehard F1 Aficionado’s may recognize it as the Anderstorp Circuit, eh? Can you say Swedish Grand Prix?

Exiting our vehicle there were a Boatload ‘O “Scooters” as Tanja noted that there was a Kawasaki Semi-trailer parked near by as shortly thereafter we were greeted to the Barking sounds of a race start as I could only surmise a Motorcycle race was occurring while Tanja tried talking to two lads sitting in camping chairs nearby, inquiring where’s the Museum? Which went nowhere as we soon discovered that they were Danes... As the entire parking lot was filled with Automobiles bearing Denmark license plates...

Thus I stood outside listening to my very first symphony of racing machinery for the 2010 season, which sounded absolutely great! As countless Motorcycles could be heard going thru their gears in the nearby distance, as we never tried going to see them since we were on a mission...

So I stood next to a small pup tent blowing noisily in the stiff breeze on a lone section of grass while Tanja went off towards the lone building to investigate if we were indeed in the right place?

Yeah, we were in search of the Anderstorp F1 Museum which was actually just a scant few Kilometers away in the town’s centre in a very non-descript business park of warehouse looking buildings; as both Tanja & I were thinking this AIN’T gonna be good, eh?

Walking towards a totally nondescript white building, as we neared the front entrance I noticed that there were a small stack of three black racing tyre’s on both sides of the three steps leading to the door, so we must be in the right place, right?

Standing inside, a man greeted us and Tanja told him in Swedish that we’d like to see the Museum; Oh, one minute please while I turn on the lights... They’re very bright and use a lot of energy, so while the man did this we moseyed over to the small Gift Shop immediately to our right, which was “chockah-block” with T-Shirts, Posters and a small sampling of Diecast Racing Cars in assorted scales.

“Ticko” returned and we began what for me, was a very enjoyable personally guided tour of the Museum, which the three of us had to ourselves.Ticko then began by explaining to me about the three “Crash Buckets” (Helmets) on display, saying how his friend had done the airbrush on one of them; informing us his custom airbrushed van with multiple Racing Cars images in various hues also done by his friend which serves as the Museum’s calling card outside was in the shop today...

Then the man introduced himself to us, my name is Thyrone “Ticko” Persson but you can just call me Ticko or Tyrone... As he said this a little voice told me I know that name from somewhere as I thought he’d said Tyrone Rogers... Who played for the UW Huskies way back in the early 1990’s; Oh Never Mind! (Thanxs for the trivia answer Randal...)

Thus Ticko began describing the poster on the wall and launched into a very brief chat about the course’s history, stating that (Anderstorp Circuit) Scandinavian Raceway opened on June 16, 1968 and how people totally scoffed at Sven ”Smokey” Åsberg, one of the track’s three founders Pontificating that the Racetrack would hold a Formula 1 race within five years.

Smokey then met with a one Mr. Bernard Ecclestone and reportedly only knew one word of English: Gangster, which upon saying this to Bernie a Grand Prix deal was cemented... To which I quickly retorted; Whale, Bernie’s certainly is a Gangster now! As Ticko pointed out that he had acquired one of Smokey’s four suitcases he’d used during these negotiations.

Then I asked him when is the track going to get another F1 race? As in Sweden and the United States both have something in common... They’re both without a Grand Prix at the moment...

As we began discussing some of the great Swede’s ‘O lore, namely Ronnie Peterson I inquired about Swedish Newboy Marcus Ericsson? Of which I was quite happy to hear Ticko immediately tell me he’d finished 11th in round 1 and DNF’ed in round 2; but he qualified P8, as I said it’s only Race One of the (2010 GP2 Series) season, so it’s still early days, right? As I further elaborated that I hear he’s managed by somebody named Kenny Brack? To which Ticko said; He’s got some wealthy backers behind the scenes and they let Kenny be the Front man... But yeah, Kenny’s involved, as Ticko further revealed that he believed Brack was the second most popular Swede Motorsports-wise currently, with his Top 4 picks being:

Although Ticko admitted that there may be others ahead of Nilsson, as Ticko seemed most enamored by the late Peterson along with Reine Wisell... As I’d guess that the latter may rank above Nilsson? But you’ve gotta be impressed when somebody knows the outcome of some “Junior” Piloto’s race weekend, eh? Especially when it’s the young Ericsson’s GP2 debut... So I found it even more ironic to here Ticko comment that he’s Sweden’s next F1 Hope, to which I’ve previously scribbled ‘bout...

And I spent the whole tour just laughing to myself every time he brought up Stefan Johansson’s name, which several Moons ago back in the CART Days; Randall aptly nicknamed him “Stevie Johnson.”

So inquiring minds wanna know: If Stevie Johnson went to Sweden and said he’s Stefan Johansson would the Swedes giggle over that?

Next I mentioned how I knew that one of my All-time favourite Formula 1 cars, the Tyrrell P34 Six-wheeler had won the 1976 Swedish GP, Ticko replied that Tyrrell had also won it in ’74 before telling me to go ahead and touch the tyre below me. It’s from the Six-wheeler, it’s a prototype rain tyre which the Team claimed was too hard. Then directly above it Ticko pointed out the “Stevie Johnson” Driving Jacket a friend had gotten him for his 50th Birthday and he insisted I touch it... Asking him if my fingers were clean from the tyre he said “Go ahead,” as the material was extra thin and slippery, so perhaps it was part of Johansson’s Nomex Underwear? (As I couldn’t actually see what it was...?)

Then he pointed out about six different P34 Six-wheeler Diecast’s in a mammoth display case, all being of 1:43rd scale, saying: there’s a Scheckter, Peterson, Peterson, DePallier, etc. As this case musta held between 50-100 models...

Gunnar Nilsson
Then it was into what appeared to be Ticko’s Treasure Room, a fairly small sized room which seemed entirely dedicated to the late Ronnie Peterson, as the first thing that jumped out at me was a great photograph of the late Swede, circa 1970’s. It was a fantastic shot of Peterson looking “GQ” in those trademark ‘70’s shades, (sunglasses) as it dawned on me those wayfarer’s were before the days of wrap-around Oakley’s, etc. But it was a great picture of Peterson looking cool, calm, collected and oh so confident, with even the hint of a smile...

Then the piece de la resistance, a yellow & black Peterson Driving Suit with what appeared to be an open faced helmet above it. Ticko commented that the suit was from 1978 and the helmet from ’76, which made me find it a bit eerie to be staring at a pair of Overalls from the same year that he’d perished at Monza in! While next to it was a second Driver’s Suit also belonging to Peterson, albeit this one was blue and Ticko insisted that I touch it too... As we bantered over what perhaps the missing patch from the right breast may have been? To which I immediately said Marlboro? Which Ticko didn’t think so since Ronnie wasn’t running this sponsorship then. Thus it was amazing to be touching Peterson’s sleeve of what might have been a Tyrrell Driving Suit?

Afterwards, Ticko pointed out the tyre below the yellow & black Overall’s and told me to pick it up... So I could feel how light a Formula 1 tyre was... And I did so easily with one hand as he told me that’s a Magnesium rim and that it was a Front tyre off of a March F1 chassis.

Sensing a deep running affection for Messer Peterson I cautiously asked Ticko; what about (the other Swede) Gunnar Nilsson? To which he seemed to not have much to comment upon other then they’d raffled off some memorabilia for his Cancer Foundation, a Poster fetching 10,000 Kroner’s and that he’d been asked about selling one of his 1:43 Nilsson Diecasts which he claimed were very hard to come by...

NOTE
As Y’all may be (painfully) aware of, your Humble Scribe is a Visually Impaired ‘Vurd Botcherer... And thus was allowed the privilege by Scandinavian Raceway Nostalgia Museum’s “Ticko” to touch and handle said Display items... But I do NOT encourage this and hope that whenever visiting such institutions you’ll follow all placard signs & instructions, RESPECT the Patron’s belongings and NOT touch anything in order to preserve its durability for others to enjoy!