INDYCAR: The Show Rolls On 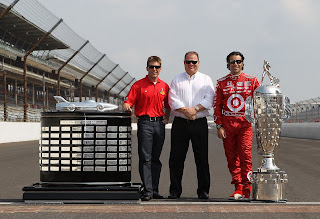 So much for improving The Show, eh? As I Just DON’T Get It! As in another F%%KING Street Race in Baltimore? Whale I certainly hope the Indy Racing League fleeced ‘Dem GOOD! As in let’s see? Cleveland Burke Lakefront Airport, Laguna Seca, Portland International Raceway and Road America-Elkhart Lake come to mind BEFORE Baltimore...

And that’s even before I’m remotely gonna try to say something constructive about the need to regress to six-cylinder (maximum) lumps! WTF? Next thing Yuhs knows, they’ll be unleashing that ABOMINATION called the Delta Wang thingy upon us; URGH! As ‘TK, nee Tony Kanaan just got my vote for “good Guy” Drivers by publicly stating on Wind Tunnel last night that he just wants it to be something that looks like a REAL Open Wheel Racing Car... (And NOT that Delta Wang thingy!) Amen Brother!

Oh wait a moment... Y’all probably thought this was gonna be some HAPPY-ARSE race report on that Texas ‘DannaWho LUV-FEST???

As I for one saw my BARF-O-METER PEAK at a 7 outta 10 Saturday night... As WTF? What in the HELL is up with the Dania LUV-FEST... I mean C’mon, she has one good race and everyone’s Ga-Ga over her? Not to mention how her good fortunes were helped immensely by her Pit crew... Along with her BLOCK Party techniques and who knows about her utilizing ALL of her vaunted P2P (“Push-to-Pass”) incentives, eh? NOT to mention shouldn’t she be running up front, after all being in top-line machinery?

As by far the WORST part of the evening’s show... After the REE-DICK-ULOUS 51mins of FILLER time with that Uber-Annoying intro-show... Along with the weeze cant’s stands watchin’ more then 4mins of racin’ without another commercial break... HMM? Can You say F%%KING RASSCAR Infomercial?

Was that BLUNDEROUS Safety Team rescue attempt of Simona de Silvestro... As Robin Miller noted last night while guest hosting Wind Tunnel with Tony Kanaan... “It looked like Amateur Night at the local Figure-8 Derby, Mayberry and the Keystone Cops” all rolled into one... As James post sums it up best of all.

Meanwhile, as Robin Miller teased us ‘bout Milwaukee, Loudon and may be even Phoenix all returning to the Indy Car schedule next year? I’m becoming resigned to the fact that IndyCar will NEVER return to Portland, which is a massive shame! Although perhaps it’s just better instead to recall the Glory Days of CART when multiple chassis were powered by four engine manufacturers with 900+ FREAKIN’ horsepower being churned outta 2.65 liter turbocharged V-8’s!

As in those were the REAL Days of IndyCar Racing!

Portland’s Centennial
Posted by Tomaso at 8:54 AM