Whale originally I had planned to resume my GP Reports after the Turkish Grand Prix, especially since I think it’s probably Herman Tilke’s best design effort to date and I especially enjoy Turn 8, which some clever F1 Aficionado has named the “Diabolica!” As this corner features the most uncharacteristic usage of four Apexes, or is that “A-pies?” Yet I just didn’t think it really was that brilliant of a race, as both Red Bulls and McLaren’s simply ran away and hid... Before Master “Zebb (Vettel) decided to jink into leader Mark Webber, subsequently gifting the victory to Lewis Hamilton with ‘JENSE (Button) in tow after they also tried to mimic the Red Bull Duo’s LUV-Tapping escapades...

Thus after a most disappointing cancellation of the Canadian Grand Prix, fortunately the most eloquent circuit rightfully returned to the Formula 1 calendar after a one year Sabbatical and I found it to be a much more entertaining event then Istanbul was.

And after all of the Talking Heads of the SPEED Broadcast crew agreed that the Option “Soft” tyre was absolute junk and there was simply NO way they’d go the distance, Lewis Hamilton confounded the experts by breaking the Red Bull Racing Duo’s monopoly upon Pole Position by snatching it in the waning moments of ‘Q3 final “Quallie” session on you guessed it! The option tyres... While Mark Webber and Sebastian Vettel lined-up directly behind :JAGUAR” (Hamilton) on the Prime Hard rubber.

And there was the usual carnage on the opening lap of the race, as the “Back markers” made their desperate lunges to leap ahead, as Sauber’s Newboy “K-Squared” (Kamui Kobayashi) was once again caught up in another accident...

Meanwhile at the front, there became a most intriguing game of Leapfrog being played as Hamilton and Fredrico Suave (Alonso) pitted early to discard the Option tyres which were turned into rubbish quickly as Mark Webber assumed the lead and held it quite awhile, albeit with the McLaren’s and Alonso’s Ferrari nipping at his heals... While SPEED’s Pitlane Boy will Buxton proclaimed he’d been told by the Bridgestone Engineers there was simply NO way the tyres could last the races remaining 40 laps!

Then Webber was finally forced to pit to replace his toasted Prime rubber which in turn saw Hamilton resume the lead while ‘JENSE made a great pass upon Alonso who got balked momentarily by traffic, seeing the Woking Duo saunter home to a second 1-2 finish with Alonso settling for third... As I actually had a good laugh as Fernando was the victim of the FOX TV Boffins who chopped his portion of the Post-race interview due to time constraints... Yeah, that’s the ticket, as FOX SUCKS!

And how ‘bout those amazing SPEED Statisticians, eh? As Bob Varsha noted that Montreal’s podium featured three F1 World Champions upon it for the first time since the long forgotten ’91 USGP held in Phoenix, Arizona (sponsored ironically by ICEBERG!) when Ayrton Senna, Alain Prost and Nelson Piquet driving respectively for McLaren, Ferrari and Benetton claimed the Podium’s three steps...

Also on hand from Yesteryear was ex-F1 Driver Emerson Fittipaldi as this week’s race Guest Steward... 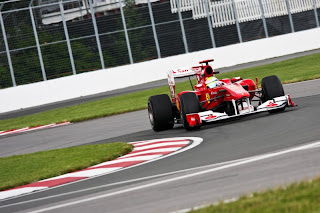 (2010 Canadian GP picture courtesy of Radu Repanovici)
Race Drive of Montreal
I have to say that I along with the cameras seemed primarily focused upon the intense ‘Scrum for the lead with little attention being paid to the back half of the field... So I’m simply giving it to Toro Rosso’s Sebastian Buemi for his fine eighth place finish along with his cousin Natacha Gachnang racing at LeMans this past weekend...


McLarenWhale McLaren certainly has put the kybosh upon Red bull simply running away with the Championship by sweeping to two consecutive 1-2 finishes during the past two races... As Hamilton’s seemed to have the edge over teammate button by having out qualified him along with winning the last two events to even their respective scores in the “W” colum as both Brit’s have now two victories apiece...

Mercedes
I have to admit I missed out on what ailed DER TERMINATOR, nee M. Schumacher from making Q3 for the first time this season? (I believe...) As the Seven Times World Champion seemingly had a miserable race and simply seemed out of his league for once if such a thing is possible? As Michael spent the entire race swerving, blocking ‘N banging wheels with his younger competitors whilst once again Nico finished ahead of Schuey in the points.

Red BullAfter being just nipped by the young Louise for Pole Position, Webber was forced to take a five Grid spot penalty when his Team elected to change his Gearbox and thus started P7 instead, thus elevating Vettel into his starting spot alongside Hamilton.

Yet Vettel once again had some sort of Mechanical issue with his Gearbox, albeit he got the Radio call of the weekend when trying to give his Engineer “Rocky” a Heart attack when asking if he should go for Fastest lap? Negative, DON’T you even think about it... Bleep-bleep-bleep came the reply... That was funny stuff ‘Zebb! As the young German basically motored around to finish fourth while Webber’s late race stop for thrashed rubber saw him finish one place behind Vettel.

Ferrari
While Alonso had the much better race, I almost felt sorry for Felipe who musta thought he was playing the leading role in Groundhog Day? “I’ve got you Babe!” As Massa seemingly couldn’t extricate himself from the Force India duo, seemingly fighting them for a lowly tenth place points finish the entire event before once again colliding with ex-teammate Michael Schumacher and falling to 15th place... Then adding insult to injury, Felipe was assessed a 20-second time penalty for speeding in the pits after having rushed to have his nose replaced after his skirmish with Herr Schumacher! Yet the Team claims there’s a raft of updates coming for Valencia, so watch this space, eh? 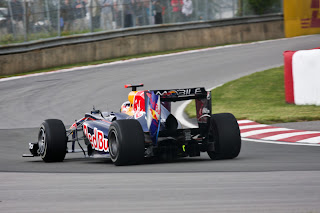 (2010 Canadian GP picture courtesy of Radu Repanovici)
2010 NewBoyz
I haveda say the most impressive thing done by these three new Teams was the “Mega” rebuild effort the Lotus Boyz made on Friday during the second practice session when the “Scrumptious ‘Juan’s” Gearbox decided to try selecting two gears at once! As they rebuilt the back half of the car along with sorting the electrical gremlins and got him back out on track before the end of the session where Jarno simply went quicker then the Virgin’s who’d been pounding ‘round the whole practice!

Lotus
Yet unfortunately it wasn’t to be Jarno’s weekend, as I recall Steve Matchett mentioning that the Lotus (No. 18) had a brake fire as it sat parked on the side of the road; YIKES! But “KOVY” (Kovalainen) had a very good race, even managing to hold off the second “Reggie” (Renault) of Vitaly Petrov for Top Honours of the NewBoyz in P16.

Hispania Racing
Another tough day for The Little Team that Can! As “Cowboy” Karun finished another race, winding up 18th, 4 laps behind while Bruno was forced to retire with Gearbox maladies, as SPEED’s Bob Varsha nicknamed the Indian Cowboy after he’d revealed his Mother is from San Antonio, Texas after the Austin, Texas 2012 USGP Shock announcement...

Virgin RacingUnbeknownst to Mwah was the fact that the Virgin Boyz made a staggering eight Pitstops to replace the quickly going off-the-boil Bridgestone tyres, as they’ve now done enough Pitstop practice for the following raced in Spain; as what’s that saying about Rain in Spain? Oh never mind... As Timo claims he was punted up the backside by Bruno Senna at the beginning of the race, which destroyed his racecar’s rear Downforce and effectively scuttled his race before ultimately retiring with a Steering rack leak. Teammate Di Grassi managed to limp home, albeit having to quit shifting as he suffered another hydraulic malady with 10-laps remaining...

NOTE
This season I’m focusing upon what I’m referring to as the “Top-8;” McLaren, Mercedes, Red Bull and Ferrari, which I expect both the Drivers and Constructors Titles to be won by these select eight participants, yet the Q3 Pole Shoot-out and Points both go to the Top 10 Competitors, so I’ll also provide any names of Drivers who make the cut that don’t belong to the Top-8...
Posted by Tomaso at 10:03 AM