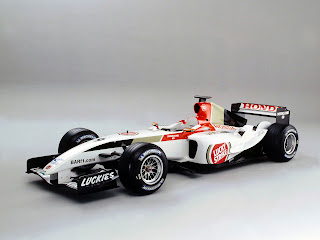 Honda officially unveiled its 2008 challenger at the companies Brackley factory on January 29th, although the car first broke cover at Valencia on January 22nd in the hands of Rubens Barrichello before Jenson Button got behind the wheel.

The team’s new test and reserve driver Alex Wurz then got his first taste of the RA108 when he drove it several metres at the official launch party. Like most of its competition, the RA108 is an evolution of its predecessor, yet in Honda’s case hopefully it’s a major evolution after the dismal performance of the RA107.

Honda has reverted back to a variation of its traditional white paint scheme while blending the Earth “Friendly” theme Honda and the rest of the major auto manufacturers are so keen to promote…
Posted by Tomaso at 8:38 AM