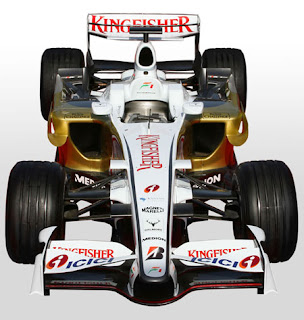 Talk about making a statement by having a Formula 1 chassis named after yourself, which is exactly what Indian billionaire tycoon Vijay Mallya has done upon launching the newly christened 2008 Force India challenger. But hey, when you’re putting up a budget of $120 million, I suppose you can name your car whatever you feel like, eh?

The car is a heavily revised Spyker F8VII chassis that Chief Technical Officer Mike Gascoyn and his staff have brought up to 2008 regulations. The VJM01 debuted its new team livery during its glitzy launch, which was held on February 6th in Mumbai, India…
Posted by Tomaso at 12:32 AM