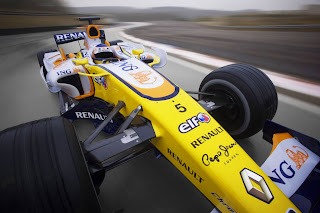 Like Honda, Renault’s newest challenger, the R28 also first broke cover at Valencia testing before having its official launch in Paris on January 31st. Of course Flavour Flav (Briatore) Fredrico Suave (Alonso) Nelson Piquet Jr. and test and reserve driver Roman Grosjean were all on hand to give the dreaded PR speak, you know when everybody says how great the new car is, how optimistic they feel towards the upcoming season, blah-blah-blah.

Of course Renault is definitely counting on Ferdi the Putz to push the Reggie further up the grid back into the winners (whiners?( circle and ultimately contest for this years drivers title…
Posted by Tomaso at 8:46 AM