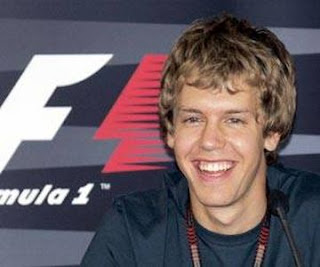 Those were the words played over the television world feed uttered by Red Bull Racing Engineer Rocky Rocquelin – As in Vettel’s race engineer... Upon proclaiming Sebastian as the 2010 World Champion – the youngest World Champion in the sport’s history; at 23-years and 134-days young... Taking the record away from Lewis Hamilton, who’d previously usurped Fernando Alonso...

As I still cannot believe that Master ‘Zebb (Vettel) did IT!

Having done BLOWN UP! Whilst leading the inaugural Korean GP, Vettel seemed a distant long-shot to Mwah, needing to win the final two races + have some help... As I, along with many – were critical towards Red Bull’s decision to let Sebastian win at Interlagos, ahead of Webber – who would have gone to Abu Dhabi one point behind Alonso, instead of the eight he started the day of the race upon Yas Isle, while Vettel began from Pole 15-markers adrift of rosso numero eight...

Race Drive of Abu Dhabi
Whale obviously this could easily go to Master ‘Zebb, (Vettel) but I’m giving it to the Rookie ‘Rooskie instead... As Renault’s Vitaly Petrov whose reportedly fighting for his job in F1 drove a masterful race, his finest ever – to date, by holding off Fredrico Suave, nee Fred Alonso for nearly 40-laps, as the Scuderia Ferrari Piloto was simply unable to pass Petrov, who not only had Ferdi-the-Putz filling his mirrors, but Mark Webber’s Red Bull nipping at Alonso’s heels the entire race as the two Championship hopefuls finished behind Vitaly! Whilst Ferdi further cemented his Moniker by reputedly wildly gesticulating to Vitaly that he was Number One immediately afterwards; but I’m happy to hear that Vitaly told Ferdi he’s Numero Uno back!


McLaren
Although the Woking Boyz finished on the Podium, albeit the second and third steps – I’d say they were never really in it, even though ‘Louise “JAGUAR” (Hamilton) pressured Vettel for the lead in the beginning, before effectively burning up his tyres... As I seem to recall a Radio transmission saying he needed tyres? NEGATIVE Lewis – you’ll haveda stay out. (Or was that Interlagos?) And then Louise claimed he couldn’t do a BLOODY thing to get around The Krakow Kid. (Kubica) thus motoring home runner-up.

Meanwhile ‘JENSE, who started directly behind Lewis; Hmm? Just noticed they both started on the “Dirty” side of the track... Ran a long first stint vs. Hamilton’s short stint, even leading the race for awhile – before making his mandatory Pitstop, and then running home to the flag in P3...

Mercedes
Ironically, it was DER TERMINATOR’s mistake that opened the door for Master Zebb’s (Vettel) improvable World Championship... Having been battling with Bosom Buddy ‘Rubino and then teammate Nico on the opening lap, Herr Schumacher applied a tad bit too much throttle and ended up looping his ‘Merc straight into the path of the oncoming luckless Vitantonio Liuzzi – who almost gave Michael a haircut... As Tonio’s Force India lurched over the stricken Mercedes! Before the two Gran Primo Piloto’s walked away laughing...

Interestingly, Nico who’d been On-fire in the first two ‘Qualie sessions before dropping down the Timesheets – one place behind Schuey... Had used up his allotment of prime rubber, having to use the options instead for the start of the race – immediately dipped into Pitlane during Michael’s Safety Car period to go back onto the preferred prime’s and then simply marched forward as everybody else needed to pit. Ultimately finishing fourth on a track nearly impossible to pass upon...

So did Michael really spend his free time in the Mercedes Motorhome doctoring Britany’s passport?
Michael Schumacher guilty as charged!

Red Bull
What can I say ‘bout young Master ‘Zebb that hasn’t already been said, eh? As I NEVER even remotely thought he had a chance at grabbing the title away from Ferdi – so I guess good things really do happen to those who deserve it, right? While Mark “80-grit” Webber seemed to finally crack(?) from the pressure of claiming his debutant Driver’s Crown... Qualifying a flatfooted fifth; behind all four of his title rivals... then clipping the wall with his rear tyre, he pitted for new rubber in a move the Scuderia Boyz copied which saw both drivers hopelessly trapped behind ‘Rooskie Petrov to the chequered flag!
Sebastion: You are World Champion! Can you Confirm that please...

Ferrari
I ABSOLUTELY LUV IT!!! Fredrico Suave, nee Fred Alonso didn’t win the World Championship! In what turned out to be the year of points leader’s defaulting in the Season Finale’s, i.e.; will Power and Denny Hamlin to name just two...

And what more can I say then Viva le Reggie! As in How ‘bout those Renault Boyz, eh? As in when was the last time that a Double World Champion could NOT find his way around a rookie driver in a Midpack Renault... As it was absolutely beautiful watching Ferdi bottled up behind Vitaly...

While I also noticed how the “No. 2” drivers at McLaren, Red bull & Ferrari; sadly Felipe Massa has slipped into this category, all dutifully – somewhat, started behind their teammates. As Felipe also fell fowl to the tyre changing game and ultimately wound-up taking the race’s final point in tenth...

Lotus
While according to ‘KOVY (Heikke Kovalainen) he had a trouble free run home to 17th place, the same can’t be said for the somewhat ‘Scrumptious “Juan, nee Jarno Trulli, who first had trouble with his front wing and then later on suffered a rear wing failure... Which has to be a tad bit worrisome, eh? Yet the team finished as Numero Uno of the Newboyz Team’s this season and thus I’d certainly like to see an Youtube video of Sir Richard Branson paying off the side bet with protégé Tony Fernandes... when Sir Richie Rich spends the day ‘Schlepping as a Flight Stewardess aboard one of Fernandes’s Air Asia flights... NO! I’ll stick to the tea instead of you Mr. Branson!

Hispania
The little team that COULD! As this has to be the smallest budgeted team on the grid? Especially since going with a cobbled together Dallara-designed chassis the entire season, which saw Bruno get into hot water for claiming ‘bout chassis updates that he’d gotten a new Rolex! Hmm? That isn’t inscribe to Uncle Bernaughty on the back is it? (Hya!)

And both drivers thanked the team, which makes me momentarily think they’re saying their goodbye’s... Which I hope isn’t the case for Messer Bruno, who I’d assume will be back next year – with perhaps the Incredible Hulk (Nico Hulkenberg) as his teammate... Hey Nico, you’d be wise to eat your words and pull a Quick Nick (Heidfeld) who drove for free at Jordan Grand Prix one year just in order to stay in Formula 1! As just ask Christian Klien how hard it’s been to find a ride, eh? Not to mention has anybody seen “Cowboy” Chandhok lately?

Virgin
Although I’d hazard a guess that the verdict’s still out upon relying 100% on CFD virtual design vs. Wind Tunnel testing Mr. Wirth... I cannot say that I’ve been even remotely impressed by the woeful performance of the Virgin’s – which is too bad since I like The Glockster... Ever since timo glock first drove in relief duty at Jordan Grand Prix way back in ‘04. Substituting for Giorgio Pantano during a cash dispute at the Canadian GP where Glock scored his first two Grand Prix points with a fine seventh place finish...

And I still don’t know nothing ‘bout Messer di Grassi, apart from it too sounded like he was saying his goodbye – not to mention the team has already announced the seat’s available for a mere 5.0m Euros!