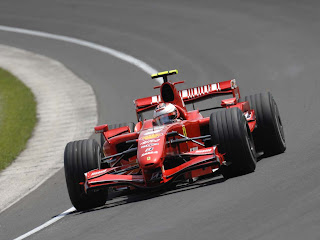 Can it really already be one year-plus since ‘The Kimster’s last Grand Prix victory... When Kimi Raikkonen used his might ‘N “Turbo” button (KERS) to blast past Giancarlo Fisichella’s surprisingly fast Force India chassis...

And although I have heard and read about the late Stefan Bellof, I was unaware that it was the 25th Anniversary of his death this past September 1st, which I only discovered upon returning from Indianapolis – finally being able to scour ze internets after watching the Belgian Grand Prix via the Memorex nearly one week later...

Race Drive of Spa Francorchamps
Although there are other more “Established Starz” to choose from, I’m giving the nod once again to the ever improving “Rooskie,” nee Rookie Russian Gran Primo Piloto Vitaly Petrov, who started ‘Stone-last after slithering off in Q1 in the rain and then rebounding to drive all the way up to a fine ninth place finish...


McLaren
Whale it seemed to be a tale of two different worlds for the pair of World Champions, as the young Louise “JAGUAR” Hamilton seemingly drove off into the Sunset, Err variable weather conditions, whilst ‘JENSE was the recipient of being center-punched by Sebastian Vettel in his haste to try chasing down the leading Hamilton as everyone was stacking up behind button...

Mercedes
Another fairly typical weekend at Mercedes, with the younger Rosberg once again outshining his elder Teamate DER TERMINATOR, albeit both Nico dropped five Grid spots for a Gearbox change while Schuey was receiving a 10 Grid spot penalty for trying to make Rubino into a Jersey-barrier Sandwich at the Hunga-boring race. But they were helped out by a rash of time penalties being handed out for various infractions during Qualifying.

Yet, I’m guessing that Norbert Haug and Ross Brawn musta grimaced somewhat when Michael gave Nico his patented Schuey Swerve when hitting his Front wing with his rear tyre as the two tried overtaking each other! Yet both Drivers managed to persevere ‘N finish the race in the points, albeit somewhat Midpackish with Rosberg getting past his elder teammate...

Red Bull
‘Aussie Mark Webber celebrated his 34th Birthday by securing the Pole before following Hamilton home as runner-up... As I’m becoming more “N more impressed by his sheer determination & maturity, and sincerely hope he’ll be crowned World Champion at the end of the season... While his younger Teammate seems to be suffering(?) from the added pressure of trying to fend off Webber’s “Superiority,” especially since he’s supposed to be Numero Uno! And once again Master ‘Zebb seemed to suffer from over-aggressive driving, suffering not one but two race incidents before soldiering home a lowly P15...

Ferrari
It was nice once again to see Felipe Massa outshine his Double World Champion Teammate Fredrico Suave, a.k.a. Fred Alonso, as the Brazilian rolled off sixth and finished fourth; while Alonso’s race seemed scuttled by poor tyre choices while trying to guess what the weather would do? Hmm? Y’all don’t think that the Scuderia would purposely favour Massa one race ahead of the (then) upcoming World Motor Sport Councils’ meeting upon that hideous German GP Team Order Shemozzle, eh?

Lotus
Jarno Trulli had another typically disappointing race, tangling with Virgin’s Lucas di Grassi, as both drivers seemed to blame the other, while “KOVY” (Kovalainen) actually cracked the ‘Q1 Qualie session barrier for the Team’s very first time by qualifying 16th, the highest placing of the NewBoyz this season... Then Heikki drove a typically safe race and finished in his exact starting position...

Hispania
And the shenanigans with “Sackoe Moneyato” go on ‘N on... As I’m still wondering if this has something to due with the rumours of utilizing the stillborn Toyota TF110 chassis in 2011, as its base design? (Nah, it’s now reported that Lotus-ART has some mythical Tie-up with the Colone base...)

Virgin
As mentioned, Di Grassi had a coming together with Lotuses Trulli, which effectively scuttled both Drivers’ races... But Timo Glock managed to hoist the Virgin up to P17 in the ever changing weather conditions during ‘Qualie 1 before motoring home to 18th, also notching Virgin’s first time to advance to the ‘Q2 Qualie session...