And now it’s somewhat time to get down to business, Err the meat in the sandwich – so to speak, eh? As Y’all are probably hunkerin’ to hear ‘bout the Bloody Race, eh? 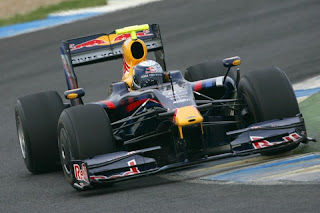 Saturday Notes (6/20/09)Spent a very enjoyable day sightseeing Bloody ‘Ol London primarily upon one of the world famous Fire Engine red Double Decker busses that frequent the Downtown landscape... As a merry band of three Adults and 3-Kindren trekked about London via the Tube, Double Decker bus, passenger Ferryboat, Tube and finally being picked-up by Robert in his awaiting motorcoach...

After an enjoyable Chinese dinner whilst said Kindren were left to their own, I settled down to watch the day’s Formula 1 Qualifying via the BBC, which Robert had been kind enough to record for me...

And I certainly don’t recall the episode, except for the fact that it was broadcasted with ZERO Commercial breaks; SHEISA! Totally UN-F%%KING Believable! I mean it makes my head hurt every time I watch either a SPEED F1 race or even worse yet... An IndyCar infomercial Versus broadcast, and that’s all I’m gonna say ‘bout that; CRIKEYS!

SPEED: Saturday ‘Qualie notes“Q1 Qualie” session, with 24 seconds left on the clock, Adrian Sutil crashes his Force India, bringing out a Red flag to end the session; with reigning (British) World Champion Louise “JAGUAR” Hamilton stuck in an unbelievable lowly P19! Easily Lewis’s worst qualifying result of the season… Oh how the mighty have fallen! As it was also to be ‘JENSE’s (Button) worst qualifying result of the ’09 campaign, winding up sixth...

Mark Webber fuming over Kimi Raikkonen supposedly blocking him on his final “Qualie” run and messing up his attempt to be further up the grid...

“Kazoo” (Nakajima) has his best qualifying outing of the year by lining up P5 and OUT-Qualifying ‘JENSE in the “lowly” Williams! WTF? 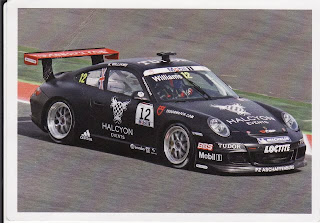 Sunday, 06/21: RACER’S COURTIronically this year’s British GP is not only on Father’s Day, but also on Summer Solstice... And today is the day that I’m off to Bloody Silverstone, as the five of us make it relatively quickly to Silverstone via the Motorway, onto the premises as my Scribblin’ begins with our contingent hanging about the BRDC Clubhouse, coming back from the Loo Robert informs me; You just missed Niki! (Lauda) Oh, I’ll be your Celebrity Spotter guide... Before we head outside to the Veranda where Robert introduces us to one of his ‘Blokes, a chap named Marino, as in the other Franchitti... As I’m standing alongside Marino Franchitti whilst Robert and him discuss his outing at someplace called Circuit de la Sarthe that he’d just contested the week prior; SHEISA! As Marino describes the Aston as a Brick! Hitting an Aerodynamic wall on Le Mans straights...

Marino Franchitti:“C’mon you BLOODY BUGGER! GO-GO-GO!”
Then I casually mentioned that Robert’s a Lions fan, how surreal to be chatting up Marino at Silverstone – TOO BLOODY COOL!

Then I think it was off to The Farm, as there’s private “Lorrie’s” awaiting us, shuttling the BRDC Royalty back ‘N forth in these 10-person Golf Carts as we ride past the masses en-foot; Pardon me, do you have any Grey Poupon?

Having arrived at the Clubhouse “Just-in-Time,” walking upstairs, we stood outside to listen & watch the days Porsche SuperCup support race, as these venerable 911’s still make great sounds... As little did I know I’d soon be meeting one of the day’s competitor’s, as during the lunch break Robert introduced me to Richard (“Richie”) Wiliams who’d qualified P4 but was demoted for allegedly “Creeping” during the start. Then Richie explained how he’d been up to second place behind Jeroen Bleekemolen before “Ironhead,” a.k.a. reigning German Champion Rene Rast, the eventual race winner gave him a LUV-Tap and he wound up finishing down in P12. Richie was a really friendly Bloke and even gave me his racing card complete with his Autograph... As Robert later told me Richie’s a close personal friend of somebody named ‘JENSE; SHEISA, it just keeps getting’ better Eh!

Later on we mused what in the BLOODY HELL is WRONG with Louise “JAGUAR” Hamilton? As he’d had his worst qualifying outing of the year by finishing 19th, which I found quite HEE-Larious! As it was his third straight race in-a-row to not advance outta the Q1 ‘Qualie session... Then during the race Hamilton was seen scrapping over 14th – 15th place with The Krakow Kid, nee Robert Kubica before sliding back and battling over a lowly P17 with ‘Fredrico Suave. (Fred Alonso)


As we sit upon a Grassy Noll (hillside) watching the Formula 1 machinery shrieks by, I simply marvel at how Master ‘Zebb is THE MAN! As Vettel simply demolishes the opposition by walking away at one second a lap over his nearest rival – BITCHIN’ DUDE! As I was completely baffled how he’d simply WALKED IT! Especially with a heavier car, as this was during the alternate fuel loads era; can you say Blitzkrieg?

Thus Vettel wins by a Country mile ahead of teammate Mark Webber whose runner-up. Rubino (Barrichello) beats ‘JENSE and Felipe Massa finishes ahead of the Kimster... (Raikkonen) As you say Tomato, I say Toe-Mott-Oh! As Nico Rosberg holds off a suddenly late charging Button for fifth place... YAY!

Afterwards we look at some of the various Williams F1 chassis on display, with a 1980 Alan Jones car on hand along with a “Regga” (Clay Regazzoni) parked nearby, and a BLOODY NIGE, nee Nigel Mansell chassis also on the lawn...

Yet my personal favourite is the brilliant deep blue FW20-something, actually a dark midnight blue 2008-spec FW30-Toyota V-8 that looks black to me, but is simply FANTASTIC! What a SWEET looking Racecar; aye Karumba...

And we also stayed to watch the “Hystericals,” err Historics, to which Artiste Dave likes to call; Old Men in Old Cars! As there was a very nice brace of Vintage Racing Cars as the Racing’s Nightcap ‘O activities; then back to the Farmhouse for another Photo-Op of the Double-Oh-Seven (007) Aston, while inside Robert sez; hey look over there ‘bout twelve feet Mate. It’s Stirling Moss holding court! Before we step out briefly onto the racing circuit! As I still recall my shoe sticking lightly to the blue & white kerbing that felt tacky, as those amazing F1 LandSharks had just pounded over them during the race... (Never seen blue & white kerbs...) Then we walked thru a Gravel Trap, another first for me in order to extricate ourselves from the circuit... Before a quick stroll over to the Gift Shop ‘N back “Just-in-Time” to leave for a 5-hour NIGHTMARE crawl upon the Motorway back to London... (Sadly Tricia would lose her camera-phone she’d taken all of the pics on just a few days later; SHEISA!)

Yet by far my best memory of this momentous outing was how Messer Button had booked Robert’s Restaurant, the Mews of Mayfair in Central London for a victory celebration, having after all won the first six of seven events, with Vettel having won China, naturally it was a Schue-in for ‘JENSE to win his Home race, right?

As Robert said his Mate reported it was a fairly somber mood for awhile before the party wound-down in the early AM... As I was absolutely delighted to have The New Schue kick ARSE at Silverstone!

SPEED: Sunday notes - F1 Debrief”Hobbo,” (David Hobbs) a member of the BRDC and staunch supporter of Silverstone exclaims how there were 90,000+ fans in attendance as Varsha muses how some races go unsold; as the preceding Turkish Grand Prix had numerous large sections of grandstand seats unfilled… While Silverstone was absolutely packed to the rafters, while Hobbo piled onto the dichotomy of Silverstone vs. Donnington Park by lamenting; Bernie DOESN’T like Silverstone or the BRDC… Yet he’s asking $32 million per year to host the race and you CANNOT get 90,000 fans into Donnington Park, not to mention the lack of infra-structure… I JUST DON’T GET IT!

Mark Webber still STEAMED at the Kimster… Over his incident in”Q3 Qualie” the day prior saying I DON’T know what Kimi was doing? Perhaps drinking some Vodka or dreaming? Kimi and I talked and he thought he was fine and I told him he was talking outta his ARSEHOLE! Thus it was entertaining to hear Hobbs defending Raikkonen and saying he really didn’t see what Webber’s issue was as Kimi had given him room to get by…

Hobbs commented how over 300,000 rabid spectators had showed up over the weekend to effectively see two men… Uhm, excuse me Mr. Hobbs but you’re WRONG as Tomaso was there to see the brilliant Master ‘Zebb (Sebastian Vettel) NOT to mention rooting for another German to hold off Messer Button in the dying stages of the race… While Varsha quipped; I sense you’re trying to send a not so subtle message to somebody… (Err, could that be one Uncle Bernaughty?)

EpilogueAs another year has slipped by whilst your Humble Scribe tries poondin’ aways on ze keyboard to wrap-up this story as I’ve long forgotten watching this race, along with many of the details having slipped away! I mean here it is late September, Err December and I’m trying to knock out my languishing F1 recaps as we’ve just been back to the site of “Crash Gate,” circa 2008, (when I finished compiling this...)obviously now having completed the 2010 Formula One season...