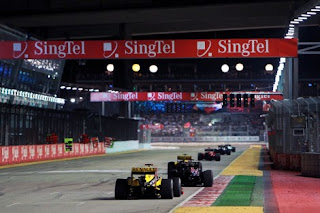 Whale I for one was overly gripped by the tension oozing from the never ending duel between Fredrico Suave and Master ‘Zebb, as eventual race winner Fernando Alonso traded Fast lap times with Sebastian Vettel... Who eventually finished runner-up while teammate Mark Webber took a somewhat controversial third place after his coming together with Lewis Hamilton in the latter stages of the race, following the second Safety Car period... As the incident was put under investigation by the Race Stewards, who eventually deemed it a “Racing Incident” and handed out no further penalties – effectively scuttling Hamilton’s title chances? McLaren teammate ‘JENSE (Button) came home P4 after giving chase to Webber at race’s end as the Drivers Championship points standings tightened up further...

Race Drive of Singapore
Whale initially I’d have given this to Felipe Massa for starting ‘Stone-last and driving to finish eighth; BUT! ‘the Krakow Kid, (Robert Kubica’s) drive from a late race Pitstop to replace a slowly deflating tyre and then making many electrifying passes to recapture seventh place with his carbon brakes glowing white HOT simply was ‘Mega impressive!


McLaren
Both drivers were uncharacteristically off of the pace of the leading duo, effectively battling for the Podium’s final step with Aussie Mark Webber... Before Lewis got it all wrong? And was handed his second straight DNF whilst Button was unable to get past Webber...

Mercedes
Another typical Team performance with Nico ahead of ‘Schuey, who spent quite a bit ‘O time tangling with others... Even going so far as to be “Hip-checked” by “K-Squared,” (Kamui Kobayashi) effectively ending his race with Michael soldiering home outside the Top-10...

Red Bull
Master ‘Zebb who’d looked untouchable in the first 3-practice sessions before admitting to having a sloppy time in Qualifying was simply unable to drive around “Ferdi-the-Putz,” while Webber was having a “Smashing Time” with ‘JAGUAR who apparently thought the Aussie would simply pull over in their ‘Mega Scrum for the Championship...

Ferrari
Begrudgingly, I haveda admit that ‘Fredrico Suave, nee Fred Alonso drove a brilliant race enroute to taking the Sport’s first “Grand Slam:” Pole, Victory, Fastest lap and leading Wire-to-Wire since Michael Schumacher did so at Hungary in 2004! While I’ve already noted above how well Felipe rebounded from his devastating mechanical fault in Qualifying (see F1 Singapore Notes above) and finished a respectable eighth.

Lotus
GREAT BALLS ‘O FIRE – KOVY! As Heikki Kovalainen’s Lotus lit-up the night sky towards the end of the race with a very illuminating (and scary) fire... As I too echoed Steve Matchett’s words: “GET OUTTA THE CAR DUDE!” Further concurring with ‘Hobbo’s sentiments of NOT worrying ‘bout putting the Steering wheel back on and subsequent fine... As KOVY emerged unscathed from the marshmallow roast! While teammate Jarno (KNOTSOE) “Scrumptious” Trulli retired once again...

Hispania
All I recall for this Minnowesqe Squad was the accident involving Bruno whilst Newboy Christian Klien finished in front of Senna. (Due to Bruno’s accident...) As the Austrian driver was making his first Grand Prix start since 2006 – for “Sackoe Moneyato” (Sakon Yamamoto) who was reputedly suffering from a suspicious case ‘O food poisoning...

Virgin
So during the opening stint of the race, Timo Glock was going to get my nod for the Race Drive with his masterful driving Clinique he was giving the much more powerful ‘BullyBoyz of Force India’s Adrian Sutil, Williams Nico Hulkenberg, Renault’s Vitaly Petrov and even Scuderia Ferrari’s Felipe Massa I believe... Before Glock’s Virgin melted under the intense pressure of these highly established Constructors, as Glock’s chassis ultimately failed him, retiring from a Hydraulics failure.

Meanwhile Lucas di Grassi’s name only came up for apparently being the Backmarker who didn’t pull over for the leaders after the second Safety Car period and was the Pick Hamilton tried using to pass Webber which all went wrong for the Briton...