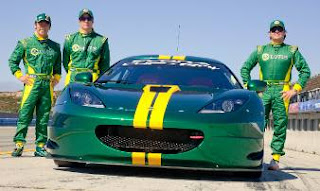 Just received the following Press Release in the No Fenders mailbox, as apparently Jimmy & Taku are Hangin’ out this weekend?

MONTEREY, CA – AUGUST 11, 2010 – Jimmy Vasser and Takuma Sato took the opportunity to get behind the wheel of the new Lotus Evora Cup GT4 prototype at Laguna Seca Raceway in Monterey, California.

Sato and Vasser joined Johnny Mowlem to support Lotus’ various activities in the days leading up to the Pebble Beach Concurs d’ Elegance. Mowlem, the official factory test driver for the Evora Cup GT4 program, provided Sato and Vasser some insight into the performance capabilities of the car prior to them taking to the track. .

Developed from the highly acclaimed Lotus Evora sports car, the Lotus Evora Gup GT4 race car has been engineered to give drivers a competitive racing package straight out of the box. Lotus Motorsport has developed the Evora Cup GT4 in conjunction with a number of prestigious technical partner using the Evora’s world class chassis as its base. Further development of the vehicles steering, brakes and suspension system delivers exceptional grip and handling capabilities on track. Cosworth are supplying a naturally-aspirated V6 race engine and full Electronics Systems which delivers 445Nm of torque at 5500 rpm powering the rear wheels through a six-speed sequential gearbox, with a paddle shift option. With FIA designed and approved safety features, the Evora Cup GT4 is accepted in over 12 of the world’s leading GT series and can be easily modified for the demand of endurance events.

Vasser, one of the most respected names in United States open-wheel racing, is the 1996 IndyCar Champion and co-owner of KV Racing Technology. After driving several laps in the Evora Cup GT4, he said, “First of all it is a beautiful car. It looks aggressive and you can drive it with confidence. I think Lotus has done a fantastic job kitting it out. It’s got all the modern amenities you would expect, and it is a lot of fun to drive.”

Sato, who spent seven seasons in Formula One and currently competes in the IndyCar Series behind the wheel of the #5 Lotus – KV Racing Technology entry, was ecstatic about his first laps ever in a GT car saying, “Driving the Lotus Evora Cup GT4 was absolutely amazing. I really enjoyed it. I have never driven a GT car before so this was just outstanding. The car sounds great, the power pulled really nicely, the handling was good. It has great braking stability so you can really dive into the corners. It is a car that gives the driver confidence he can go really deep into the corner before braking. This is a car you can learn and attack the lap time with. It is a driver friendly car.”

Lotus Motorsport is targeting the Nurburgring (Germany)round of the European GT4 championship, the weekend of August 28-29, for the debut of the Lotus Evora Cup GT4. The driver line-up will be announced when the entry is confirmed...
Posted by Tomaso at 8:28 AM