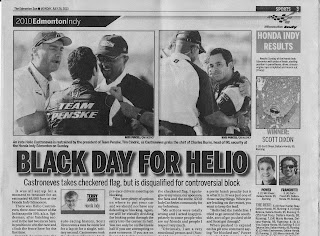 As in case you’ve been under a rock or something, Helio Castroneves, the Dancin’ FOOL of the ICS has now been fined a whopping $60k and put on Probation for the remainder of the season due to his Edmonton IndyCar after race transgressions... BIG FUCKING DEALIO!!! Tisk-Tisk Hulio! Can Y’all say wrist slap?

As you may have noticed? I seem to be the only person who called for Hulio to be given a One race BAN for grabbing not One, but Two Indy Racing League Officials... Not to mention his alleged “Potty-mouth” theatrics after having ignored the Black flag displayed to him...

“Following the race, Castroneves was penalized 20 seconds and placed at the end of the lead lap (10th). After exiting his car, Castroneves engaged in altercations with two officials on pit lane.

However, that does not justify the post-race conduct of Helio toward series officials. This is a very serious matter and we weighed all options, including suspension. But we felt suspension would hurt the fans more than anyone else. Fans have paid their hard-earned money to watch the best drivers in the world and many bought their tickets for upcoming events with the expectation of watching Helio.” (said Randy Bernard; Indy Car Series CEO)
(Source: Speedcafe.com)

And thus Prince Hulio once again slips outta another wrongdoing upon his part, as apparently he’s got some sorta Teflon coating, eh?

Then there was Seven Times Formula 1 World Champion Michael Schumacher’s UGLY looking BLOCK-JOB on his Bosom Buddy ‘N ex-Teammate Rubino (Rubens Barrichello) at the Hungaroring last week which saw Herr Schumacher trying to basically squeeze Rubino into the wall at somewheres north of a “Buck-70+, (170mph+) SHEISA! Of which afterwards the Race Stewards gave him a 10-place Grid penalty for the following Grand Prix at Spa Francorchamps.

Sir Jackie Stewart:
"It was one of the most blatant abuses of another driver that I have seen,”

“It is a terrible example from a man who has seven world titles – bully-boy tactics.”
(Source: Joe Saward wordpress.com)

Now I’m certainly NOT trying to compare these two Athletes... As I find DER TERMINATOR, nee Herr Schumacher to be head ‘N Shoulders above Castroneves, although both men do seem to have a rather dubious streak behind them... Yet it just seems to Mwah that both drivers got OFF extremely light once again due to their reputations and status in their respective sports.

I mean, can you imagine what would have happened if it had been some “lesser” Indy Car driver making said transgressions? Would an Alex Lloyd, Tomas Scheckter, Takuma Sato or HELL! Even Milka Duno have been treated so favorably? As in would they have escaped with a simple ruler knuckle-wrap? As in the very least there should have been a Points penalty affixed to Hulio’s sentence, or a fine of $100k to get his attention!

And as for the Fans, I say BULL-HOCKEY!

Way back in 1999, your Humble Scribe paid a very large portion of Dinero to go and finally see Herr Schumacher in person at no less then Monza, Italy... And I’ll always remember a co-worker asking me if I was still gonna go after he’d unbelievably broken his leg just prior to my departure in the British Grand Prix... Needless to say, I still went abroad and attended the race, even without Michael’s appearance, which was the catalyst for said trip.

And how about all of the Fans who bought tickets to see Schumacher’s return as Felipe Massa’s substitute after his horrendous accident at the Hungaroring last summer, eh? As after all of the whipped-up frenzy, Michael had to tearfully announce he’d be unable to oblige due to a previous neck injury suffered while racing Motorcycles...

Yet again, I’m NOT comparing the two totally different circumstances... I’m just trying to point out that once again Hulio got away with his antics, his behaviour was DESPICABLE! As 9yr old No Fenders Cub Reporter Alex described to us how Helio could clearly be seen upon the Big Screen monitor jerking Messer Charles... Who I’d like to join Dario Franchitti in placing 50 looneys on; Hya!

Meanwhile it simply seems that the most prudent and honourable thing for Herr Schumacher to do would be retire again at the end of the season, as I agree it appears he’s becoming more ‘N more desperate on the Race track as the year progresses...

And that’s my take! If you don’t like it then simply “Fine Me!” While I certainly hope that Hulio WON’T be able to write-off said monetary penalty upon this year’s Taxes...

Yet after reading Ryan’s most interesting story about the plight of Open Wheel Racing hopeful Picho Toledano, not to mention having just listened to Davey STUD! Hamilton... Hulio “N Schueblocker’s antics seem somewhat unimportant to Mwah!

Picho Toledano’s Road to Recovery – The young Mexican driver looks to return to Open Wheel Racing Full time in 2011
Posted by Tomaso at 6:37 AM