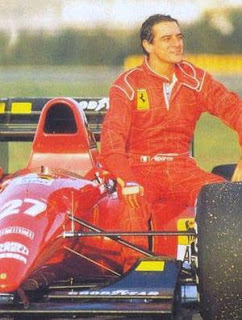 Whale as noted before… Always a day late ‘N dollar short, eh? As I’ve finally finished reading volume two of Professor Steve Matchett’s Mechanic’s Trilogy: The Mechanic’s Tale a paltry 10yrs after its initial release this past Labour Day weekend; (2009) and then managing to NOT save my first draft of this precious story; SHEISA! (Thus having to re-type the whole BLOODY thing! Which since has been lost in a No Fenders WormHole, nee I.U.T.)

Thus I found it even more hilarious during SPEED’s Friday coverage of an extremely soggy Japanese GP practice, that Red Bull Racing’s John Wheatley wryly commented how 15yrs ago he wouldn’t have attempted crossing the waterlogged Pit Lane to talk to Steve… (Ah, the privileges ‘O Fame, eh?) As if memory serves me correctly(?) Wheatley was some chap named Michael Schumacher’s No. 1 Mechanic, but I digress…
Steve Matchett's Three Principles:
Some where’s nestled in this book; I jotted down Professor Matchett’s three Principles towards achieving any task in life...

To which I’m having a hard time applying at the moment... Seeming to feel like having a major case ‘O AD??? Uhm, what is it; Oh Never Mind!
Thus, I found Matchett’s (second) book overall to be fairly enjoyable, albeit some sections of the technical aspects of the sport become a bit dry. Like when droning on and on about Moog valves and the intricacy’s of Active Ride suspension.

As I’ve mentioned how rory byrne was the ultimate cloud spotter during Der TERMINATOR’s reign at Benetton, and subsequently at Ferrari in my brief Cumulonimbus spotting story.

Matchett’s natural observations about the immediate “Planned Obsolescence” of word processors, a.k.a. Confuzers, seems a bit scary having been written some 11yrs ago, as he notes how he’s hoping to recoup the advance on his book he’s spent to purchase a laptop, Err Notebook to write it upon will hopefully last him a few years before its no longer useful...

Kinda like I keep hoping I can squeeze another year’s service outta my Confuzer as I Scribble away ‘N poond ze Keyboard; Hya!

Or how over the Hungarian GP weekend, of which I was perusing the Memorex tape copy way back when during a Friday Practice session, I found it somewhat ironic how Steve waxed on eloquently about ‘Ol “Billy-Bob,” nee Martin Brundle, who Matchett said positively should have won the ‘92 Canadian Grand Prix yet failed to due so due to fluke circumstances out of his control. As Professor Matchett claims an extremely rare bolt had inexplicably sheared in the Transmission, causing it to become a bucketful ‘O neutrals! As this passage of Steve’s book seemed even more ironic, as who had the Television crew just managed to capture slumming about the ‘Hungaroring Pits. Yep, it was ‘Ol Billy Bob!

But by far the funniest parts have to be the story of unknowingly procuring a sheet of Titanium from the Material room and proceeding to cut it up into a multitude of tiny pieces in order to make himself a set of drawer dividers for the racing car Brakes “Department” he’d just volunteered for, hence joining the Traveling Race Team and being allocated a very small section in the rear of the team’s transporter… To which the senior “Truckie” tells Steve he’d be very smart to NOT show anybody his drawer dividers!

Coupled along with later in the book whilst mentioning how much approval his first book receives and all of the various letters & fan mail he collects, including one juicy reader comment mentioning how his family particularly enjoys Reading his book in the “Loo!”

How Nigel Stepney took the chance and hired him after an interview with the Onyx team; which fortunately for Steve didn’t pan out, since Onyx would shortly go out of business after a very brief period of Grand Prix competition.

Musing over how badly his feet ached during his very first Grand Prix weekend at Imola in 1990 and NOT knowing how he kept going without any amount of sleep the duration of that first outing.

And how a one Mr. Mike Coughlan was Nelson Piquet’s race engineer... Remember him?

Or Nelson’s final race in an Australian downpour, (Adelaide, 1991) with Nelson begging for them to release the car so he could have one more lap… Nelson, you know we cannot do that, shut her off.

And taking an exhilarating Hot Air Balloon ride in Australia after the Season Finale first thing in the morning, barely making it over a Farmer’s house, who’d threatened the balloons operators that he’d shoot the next time they came by after having dug up his fields on prior landings. Being able to see the Farmer’s shotgun, taking shots at them, the balloon coming down as the Farmer raced after them, while the balloon pilot’s brother and chase crew raced to them first, as they all threw the balloon and gondola into the van and sped off as the Farmer approached…

Or claiming that Alessandro Nannini was to blame for his addiction to Espresso coffee, as Nannini would always pour Steve a coffee when getting one for himself whenever he saw Matchett busily working away on rebuilding the brakes in the back of the hauler… To which certainly isn’t normal! Can you imagine Raikkonen, Alonso or Schumacher doing such a thing?

NO Steve! Nannini’s more then just a decent Chap! As the likeable Italian always struck me as a great character, the last Formula 1 Piloto I can recall openly smoking cigarettes and being one of my favourite Gran Primo Piloto’s due to his outgoing nature, along with being Bloody Quick!

And being given the task of working Nelson Piquet’s pit board – Having never done such a thing or having NO knowledge of how to. Don’t worry Steve, we’ll teach you everything to know… “Johnny on the spot!” Uhm? Excuse me Mister Triple World Champion… Pit Now!

BIG BROTHER IS WATCHING YOU!

Wryly commenting how he’d have liked to post a poster of Joan Villadelprat with said slogan below it inside the Benetton Race Shop; a pretty entertaining, if somewhat dour comment/opinion of your immediate superior, as Steve waxes on about Joan, although claiming to have become deeply respectful of Villadelprat’s Managerial abilities and even becoming good friends later on.

And ‘Flavour Flav, a.k.a. Flavio Briatore NOT knowing the slightest thing about a Grand Prix car… As Matchett could be rebuilding his Escort’s carburetors during lunch and Flavio could walk by and say keep up the good work Steve, having absolutely NO CLUE that there weren’t ANY carburetors utilized on current Grand Prix “Lumps.” (Which seems to precede Nelson Piquet Junior’s vehement attack upon Flavour Flav by a full decade…)

And although I cannot think of anything GOOD to say about The HMS Monogram, nee Briatore, I did enjoy the part about Flavio letting the entire team go absolutely “BONKERS” upon Doing-the-Double; clinching the Drivers and Constructors title in ’95, where they sprayed (and consumed) so much Champagne that Flavio was more then willing to pay the Establishment’s Owner for installation of new carpets after the Owner complained to FB…

Yet on a somewhat serious note; there was Steve’s journey to the Argentine Falklands War Memorial.

As Matchett dotes on having gone to Argentina with a completely false perspective of the country’s people and having great trepidation whilst standing at the War Memorial in his Benetton “Dress Blues” thinking he had absolutely NO right to be standing there… As a few sobbing widows placed fresh wreaths upon their lost Husbands.

And then finally, there was the mass Staff exodus from a once mighty World Champion team… As Schumacher’s defection to Ferrari triggers the loss of valuable staff, as nearly all of the top personnel depart.

As I seem to recall that it was none other than Flavour Flav defiantly stating it was the car, NOT the driver who’d won their Championships… Upon replacing Herr Schumacher with the Scuderia Ferrari’s two drivers Gerhard Berger and Jean Alesi who would manage a combined tally of a single Grand prix victory during their Benetton tenure.

As Matchett would finally leave Benetton on February 13, 1988, after having spent eight seasons in Formula 1; six with the Race Team and two with the Test Team after injuring his back during a Pit Stop practice “Down Under” in ’96, as I’ve just realized that I’m scribbling about Steve’s experience’s after having been gone from Benetton for 22 years, which must seem like a lifetime ago, eh?

MATCHETT: Lord of Mechanics
Posted by Tomaso at 10:42 AM