Rubino to crack the 300 GP barrier 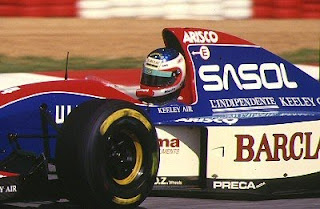 This weekend’s Belgian Grand Prix, as thankfully Formula 1 is back, will see F1 Veteran ‘Rubino, a.k.a. Rubens Barrichello make Grand Prix history... As I cannot think of a more befitting venue then the mighty Spa Francorchamps for the affable Brazilian to become the Sports very first-ever Gran Primo Piloto to make 300 Formula One starts... Although according to ‘WICKEDpedia, it’ll only be his 300th Grand Prix entry and reputedly he’ll make the magic number of 300 starts at Suzuka, Japan, so – You make the Call!

Nevertheless, let this monstrous accomplishment sink in a moment – Eh! As I can still fondly recall ‘Ol Rubino’s Grand Prix Debutant season behind the wheel of an ultra ‘Sharp lookin’ Sasol Jordan-Hart V10 Wayback in 1993; Aye Karumba! As I believe the only other Driver on today’s Grid driving back then was some Cat named Schumacher... As in a one Mr. Michael Schumacher,

As Tacoma Bureau Chief Mary Ellen exclaimed ‘RIGHT ON! Proclaiming that Rubens should at least own one record that DER TERMINATOR, nee M. Schumacher doesn’t! Albeit it was once thought that NOBODY would ever crack Riccardo Patrese’s Uber-stout record of 256 Grand Prix starts... As Patrese has now slipped down the leaderboard to P3; behind Rubino and M. Schumacher, who’s working on his 262nd GP start this weekend... The sight of his very first-ever F1 victory Wayback in 1992...