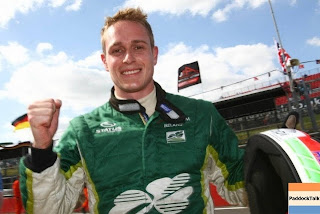 I must admit I know very little about the racer Adam Carroll of Northern Ireland... Although I’m impressed by his CV and enjoyed just listening to him via Don Kay’s ‘lil radio show (Autosport Radio) this past Tuesday night... Even if he sounds a wee bit overly serious, he did seem to have a pretty quick wit about him and I’m guessing I wouldn’t want to be in a room with him, Will Power ‘N Paul Tracy... Since the jokes would definitely be on Mwah, eh?

Adam Carroll· Will drive the #27 Automatic Fire Sprinklers car for AFS Racing/Andretti Autosport at Mid-Ohio
· Qualified P10 and finished in 16th place in his first IZOD IndyCar Series race at Watkins Glen with AFS Racing/Andretti Autosport
· In ten seasons, recorded a total of 41 wins, 86 podiums and 24 poles in 223 races
· Earned the title of A1GP Champion in 2008/2009
· Secured 5 wins, 13 podium finishes and 4 poles in the GP2 Series in 2005/2007
· BAR/Honda Formula 1 test driver in 2005
· Finished second place in British Formula 3 in 2004
· Earned a third place finish in Masters of Formula 3 in 2004
· Became British Formula 3 National class champion in 2002
· Placed third in Formula Ford Festival in 2001
· In 2000, won the British Formula Ford Winter Series championship
· Started racing karts in 1993 and went on to win a scholarship to attend the Elf La Filiere
(Source: Autosport Radio.com)

And like many Europeans, naturally Carroll’s ultimate aspirations were to become a Formula One driver while climbing the ladder of stepping stone series, having made it all the way to the rank of Test Driver for the BAR Honda Team alongside Anthony ‘ANT Davidson, Enrique Bernoldi and Alan van der Merwe. Not to mention somebody with a really BIG Schnoz named tony Kanaan taking a spin in the BAR Honda that year...

Although Adam was unwilling to give Don an answer when queried about how much he was shilling out to “Mikey.” (Michael Andretti) it was interesting to hear the Irishman claim it would have taken $4.0 million Euros to land the second Virgin F1 Racing seat, which Brazilian Lucas di Grassi did instead. While Carroll mumbled something about and look where they are...

Yet I find Carroll’s demeanor ‘N persona to be refreshing... Telling Don He just stays in his own truck on weekends when asked what it’s like being teammates with ‘DannaWho?

You can check out the entire webcast featuring Davey Hamilton, Jon Stanbrough and Adam Carroll by clicking here, where Davey Hamilton confirmed he’ll be contesting the upcoming Chicagoland event and says his entry was the 29th...
Posted by Tomaso at 11:23 AM