So once again we here in the Pacific Northwest have just celebrated our annual summertime passage Extraordinaire... Fondly known as Seafair, which culminates with the Unlimited Hydroplanes race on Lake Washington with the featured guest being those magnificent Blue Angels who put on a fantastic show over the Hydroplane course; SMOKE ON!

Yet somehow this year it just didn’t quite feel like Seafair around here, as Thus Duh... That nasty global thingy called The Economy looked set to scuttle the event and possibly curtail the entire Unlimited Hydroplane circus? As the yearly race known recently as the Chevrolet Cup lost its sponsorship when Y’all know what happened to “Gov’t” Motors, right? Hey GM: “You sunk my Seafair!”

And aghast! There were even whispers that the Seafair Pirates (another yearly tradition) would be forced to walk-the-plank also due to a scurvious lack of Moolah; CRIKEYS! Shiver Me Timbers Matey’s! And adding insult to injury was the fact that this was the 60th running of Seafair...

Hydroplanes hang on after losing another race in U.S.

Yet thankfully first Dukes Chowder House stepped-up with a $40,000 cash infusion, and then Albert Lee Appliances joined-in to secure the event for a further three years, as the races Title sponsor. Yet the boat count looked somewhat shaky to Mwah this year, as I counted only nine boats slated to run, (originally) which could be down to eight due to the U-25’s major damage at the previous race in Kennewick, WA. As Dr Ken Muscatel claimed that basically half of the boat is unrepairable and they’re working round-the-clock to replace 50% of the boat which might race unpainted? As my quick accounting came prior to the actual race weekend...

Yet much has changed since I last tuned-in these once mighty “Beer Wagons” of Yesteryear, as it seems to me that the sport in whole has miserably slid downwards since the demise of Bernie Little and the cancelation of the Budweiser sponsorship, with Miss Budweiser going head to head with the Miller High Life boat way back when...

As I began hunting ‘round le internets for any news of the sports most recent round held in Eastern Washington in Kennewick, part of the Tri Cities region, I was surprised to discover that the venerable Dave Villwock was now piloting the Spirit of Qatar, say what? WTF? And NO! I DON’T have any problemas with that, just that it doesn’t sound like a traditional Unlimited Hydroplane name to Mwah, as unfortunately I’m stuck in the era of Atlas Van Lines, Pride of Pay ‘N Pak, Miss Budweiser, Miss Bardhal, Squire Shop, Oh Boy Oberto, Miss Madison, etc. So I was very surprised by this... But even more surprised to learn that the ABRA, which even that doesn’t sound correct, as I’m used to the acronym APBA (American Power Boat Association) had hosted its very first International race last November at Doha, Qatar. 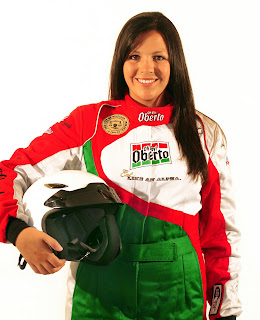 (Kayleigh Perkins Mallory; Source: H1 Unlimited.com)
Meanwhile, Kayleigh Perkins Mallory, who just got married on July 31st, apparently has received a very unique wedding gift from the Oh Boy Oberto camp, as the Unlimited Lights Champion took her very first ever test aboard one of the ‘BIG BOYZ Boats, none other then the current Two-time High Points Champion U-1 Oh Boy Oberto Unlimited Hydroplane Saturday morning.

As you may recall that Northwest legend Pat O’Day nicknamed her the Danica Patrick of Hydroplanes last year... Oh Brother! Yet Kayleigh (22yrs old) becomes the very first female to pilot a turbine powered Hydroplane and the first lady since Brenda Jones raced in the early 1980’s, retiring in 1982, having won a Heat race in Seattle 29yrs ago...

Yet Kayleigh wasn’t just on a Sunday cruise, instead running a handful of laps at a high rate of speed, with her third lap being 146.368mph - tying her brother Brian's best qualifying lap on Friday in his U-21 Unlimited Hydroplane. Kayleigh then raised the bar by running a further lap speed of 147.058mph, which would have out qualified her brother Brian’s Qualifying lap by one place...

And Villwock and David’s arch nemesis Jean Theoret has retired from racing upon the H1 Unlimited circuit, as the U-37, now known as the Miss Peters & May was to be piloted by JW Myers, but John Zimmerman drove her at Tri Cities instead and continued deputizing for Meyers in Seattle.

While it would seem somewhat symbiotic if Villwock tied perennial Northwest Hydro legend Chip Hanauer’s record of 61 victories none other then on Lake Washington, as Hanauer’s total is one shy of the Godfather’s, nee Bill Muncey’s all time record of 62 APBA wins, yet it wasn’t to be...

As I alike Chip still am locked in the battle royales ‘O yesteryear when the drivers had to spend five minutes jockeying for lane choices, which always made the starts even that extra bit more exciting! As I’m simply NOT a fan of the lanes being assigned – although I suppose it’s a safety thing, eh?

the showdown was slated for race 2A on Sunday, where lane choices are inverted, seeing Villwock on the very outside with rival David next inboard of him, as Brian Perkins in the Miss Albert Lee was the Heat’s winner at 136.322mph, followed by J Michael Kelly. (U-7) David and Villwock respectively... As Villwock couldn’t afford to give away any points to David in the chase for this year’s High Points Championship...

Thus Heat 2B was devoid of the two main rivals leaving Greg Hopp (U-100) to an easy victory, while Dr Ken Muscatel’s U-25 Car Pros actually contested the race, albeit being Disqualified and classified DSQ.

Heat’s 3A & 3B were once again won respectively by the Hydro’s BIG ‘DAWGS, nee Oh Boy Oberto ‘N Spirit of Qatar respectively, whilst everybody anxiously awaited the day’s final Heat for all of the marbles where Steve David had lane-1 over Dave Villwock, outside in lane-2... And that’s the way it would stay all the way to the chequered flag, as both boats bounced ‘N skipped their way over the notoriously choppy waters of Lake Washington in the five lap finale, as both drivers were kept busy flying their respective hulls over and thru the multiple rollers, as winner Steve David wryly noted – the key was to keep the prop (propeller) in the water... Which meant pointing the hydro’s nose skywards!

And thus Steve David will lead the Unlimited Hydroplane Armada to the season finale at the second annual Oryx Cup in Doha, Qatar, where he leads rival Dave Villwock by 506 points, which is equivalent to over a one heat advantage, as the Oh Boy Oberto seeks to become only the second-ever BIG ‘DAWG to win three consecutive National High Points Championships... As Uh, guess who’s the only Beer Wagon to have ever done so...