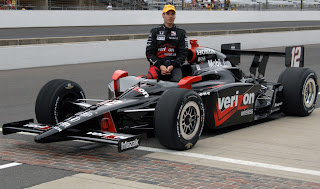 Now entering his third decade of Indy Car racing, Roger Penske would experience a flood of emotions from more hallowed victories at the Speedway to multiple Drivers’ deaths. Yet as always, once again The Captain has come out smelling like a rose with the inking of Will Power to a full time ride at Team Penske!

TELECONFERENCE: Penske first to the Barber

1989
Rocket Rick became the very first driver to ever capture five Pole positions at the Speedway that May aboard a Penske PC-18/Chevrolet, having tied Rex Mays feat of capturing four poles the previous year, in which Mays had accomplished back in 1948!

Yet, it would be Emerson Fittipaldi capturing his first Borg Warner trophy for Pat Patrick and Chip Ganassi in a customer Penske PC-18/Chevy that year, with “EMMO” enroute to the CART Championship crown at year’s end.

1990
Having been beaten by the customer “BAD HABITS” Marlboro team of Patrick/Ganassi... Penske did the sensible thing and hired reigning CART Champion Fittipaldi to drive for him, hence forming a three car line-up for the season.

And EMMO immediately repaid The Captain by claiming the Pole at Indy, securing Team Penske’s third consecutive Pole position at the Brickyard, with Rocket Rick starting from “P2,” while “Sully” (Sullivan) rolled off from ninth, but it was to be some cat named “The Flying Dutchman” Arie Luyendyk’s day at the Speedway instead.

1991
Rick Mears now looking somewhat out of character, in Marlboro red and white versus his most recognizable Pennzoil yellow, albeit having made the switch the year prior, garnered the sixth and final Pole of his storied career at Indianapolis that May, becoming the only driver to date to accomplish the feat.

Thus starting from Pole, in what has to be my most favourite Rocket Rick win at the Speedway, when he made the move affectionately known as “The Pass” upon Mikey Andretti enroute to his record tying fourth Indy 500 victory at the Speedway during the 75th Memorial Day classic, Mears would only contest a single Indy 500 afterwards before announcing his retirement.

Emerson went onto score his second and final Indy 500 victory after a late race tussle with Little Al, then driving for Rick Galles, as Unser Jr. stood by his wrecked racecar waiting for EMMO to pass by and then flashing him two thumbs up before going to the awaiting Ambulance.

Yet, I believe more noise was made over the Brazilian shirking tradition by drinking Orange juice in Victory Lane instead of Milk in deference to his burgeoning OJ concern back home in San Paolo vs. winning Indy.

1994
Truly an epic season for Penske Racing, as The Captain’s Indy Car team was nearly unbeatable, with Al Unser Jr. winning a total of eight races, including that year’s Indy 500 with the all conquering Mercedes Benz “Stock Block” engine enroute to his second CART Championship, while Paul Tracy scored two victories and Emerson Fittipaldi managed to secure a lone victory that year, it was to be one of Roger Penske’s most successful seasons ever.

1995
After a record breaking year in 1994, when Penske’s three car “Super team” of Lil Al, “EMMO” and Tracy had obliterated the competition in CART, unbelievably Team Penske was unable to get its two drivers; Unser Jr. and Fittipaldi up to speed aboard their Penske PC-24/Mercedes. And The Captain even went as far as to purchase two Lola T95/00 chassis for the driving tandem. But to no avail could either driver make the show. As Roger Penske would miss the next five years, as Tony George’s rival Indy Racing League left Penske and CART out in the cold for the 79th running of Indy, with his 25-8 IRL participants rule for the formation of his rival Indy Racing League, kicking off in 1996...

1999
While many may recall that this was the year that tragically Gregg Moore was killed on Halloween at Fontana Speedway, ironically owned by Roger Penske at the time, as Moore had previously committed to drive for Roger the following year, does anybody recall that Rookie Gonzalo Rodriguez was killed at Laguna Seca Raceway on September 11th, in what was to be only his second start ever, while driving for Penske Racing, which at the time had a revolving door policy for its second car alongside the slumping Unser Junior, as unfortunately Rodriguez was fatally killed at the “Zanardi Curve,” better known as the Corkscrew after slamming into a concrete retaining barrier at 140mph.

And we now also know, that it was Penske’s inking of Helio Castroneves as Moore’s replacement via Carl Hogan that apparently a slighted Emerson Fittipaldi felt obliged to drop the dime upon his ex-charge Hulio in a wrangle over management fees.

2001
Having witnessed rival CART team owner Chip Ganassi’s Juan Pablo Montoya obliterate the competition at Indy the previous year, when the first seven finishing positions were held by CART Drivers, Roger Penske could not stay away from the hallowed Speedway any further, entering two cars for his team, which would see a most welcome return as Helio Castroneves would be victorious with teammate Gil De Ferran runner-up, who would also go onto capture his second Vanderbilt Cup for what was to be Penske’s final season in CART.

2002
Roger Penske rocked the establishment by deciding to leave CART in favour of the Indy Racing League, in order to be able to contest that year’s May classic fully emblazoned in Marlboro livery, as the nasty “BAD HABITS’ Tobacco sponsorship was now confined to only one series per team entry. And The Captain didn’t fail to deliver as once again Castroneves won the epic event enroute to becoming only the fourth driver ever to have his “Mug” etched upon the Borg Warner trophy two consecutive years in a row, which wasn’t too shabby of a batting percentage in his first two attempts at the Speedway. Yet I recall gleefully indulging upon Panther Racing’s Sam Hornish Jr. securing his second IRL title over Penske Racing that season.

2009
For the 93rd running of the Indy 500, which begins the three year Centennial celebration, Penske Racing once again fielded two Dallara/Honda racecars for Ryan Briscoe and Helio Castroneves in the traditional red and white livery of Team Penske. (Marlboro)

Yet obviously the big news for Roger Penske over the winter was the plight of “lead” driver Castroneves, as Hulio was indicted upon Tax evasion charges along with his manager/sister and lawyer, whom as we all painfully know were acquitted.

Thus, having previously inked Will Power to a back-up/replacement contingency Driver plan in case Hulio was incarcerated, Penske once again decided to field a three car armada for the month of May, with Power driving the Penske Racing No. 12 Verizon Wireless racecar, while Castroneves returned full time to his No. 3 and Briscoe continued on in his No. 6, while Power’s fate for the remainder of the season was unknown at that moment, Penske cleverly crafted together a partial season for the promising Australian.

Meanwhile excruciating fanfare was made over Castroneves scoring his third Pole at Indy after a late challenge from teammate Briscoe, with Team Penske cars rolling off 1-2, giving The Captain an unprecedented 15th Pole at Indy, while Power started a respectable ninth, the day ultimately belonged to Castroneves who scored his third Indy 500 victory...

2010
After winning for The Captain in dominating style at Edmonton in a retro-theme Penske Trucking paint scheme during the summer of ’09, Will Power had an unfortunate crash at Sonoma, CA which saw him break his back, leaving Power to ponder over the winter if he’d return to Penske Racing in 2010?

Fortunately for Will, Roger wisely decided to bring the Aussi back for a full-season ride in a third Penske Racing entrey, as The Captain would contest the Indy Car series with three drivers for the first time since 1994. And Power’s addition has paid off handsomely this season, as he’s simply dominated the Road/Street courses, currently the only Indy Car driver to have scored multiple victories, with three, not to mention a boatload of Pole’s, as Power currently leads the Points Standings and is a credible threat to bring roger a second Indy Car Championship...