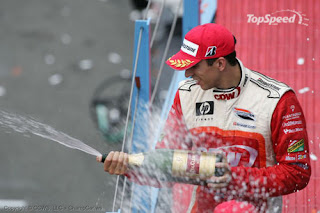 “Justin’s an ANIMAL on Road/Street courses!”

As he did it again, with even second place finisher Will Power sounding somewhat surprised to hear that the ‘BIG UNIT had gone all-the-way to the Fast 6 Shootout without using any Red’s; Really? As I think it was Watkins Glen or somewhere else before that Justin pulled off the same feat!

Of course I think Wilson had Pole over Will at the Champ Car series Swansong at Long Beach before dropping to fourth and ultimately outta the race as Power rocketed off to victory... But as THE ‘DAWG sez: Photo above strictly for Schuwerve Generating purposes... As No Fenders tries to pull a little Wind Tunnel FEEL GOOD Mo-Jo for Justin ‘BIG UNIT Wilson tomorrow...