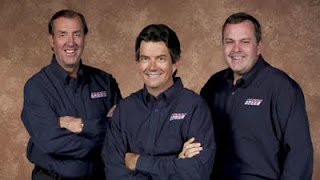 Ah, the life ‘O a literally ‘Vurd Botcherer, eh? As I originally had the following conversation with Tacoma Bureau Chief Mary Ellen, way back on President’s Day 2009; Aye Karumba! Yet, another fine story has slipped into the I.U.T. Rabbit-hole, or is that Wormhole? (As in the “IngleFart Unit ‘O Time... Which is a variation of THE ‘DAWG’S (Terry) Angstadt Unit of Time. (A.U.T.)

As she rhetorically stated: Can you imagine if Stick ‘N Ball Announcers had to be intelligent? As Mary Ellen proclaimed that she’d rather listen to a Formula 1 broadcast ANY day of the week over the NFL, NBA, MLB, etc, which of course TOTALLY KICKS ARSE, EH! Although I’d hazard a guess that she’s NOT overly enamored by her Main Man’s demise... As in a one Messer Peter Windsor, who’ve I’ve enjoyed calling the “House ‘O Windsor;” Hya! As I’m guessing she probably isn’t a fan of that upstart Will “Buxom” Buxton? Then again I suppose I’d better ask her, right?

Yet having just read Geo. Phillips take upon the bungling annual ABC/ESPN Indy 500 Broadcast, which sees Marty “Nationwide” (or should ‘Dat be Doublewide?) Ried trying to get a rise outta Scott “Somenex” Goodyear and Eddie Rachels... (Cheever) Who I’ve tried keeping from lamenting as Mr. Under-Uh-Cheever... As it appears that the yearly Broadcast has left George’s “Oil Pressure” a quart or 4-LOW!

2010 Winter Olympics
Yet I noticed during this past winter’s “COMMERCIALYMPICS!” That as a visually impaired ‘Vurd Botcherr, I’m tending to lean more ‘N more upon what I’ll describe as “Signature Voices,” which to my definition are the voices of reason, intellect/knowledge and passion for the sport they’re presenting.

Thus I found the following voices to be very enjoyable to listen to, as the following Quartet of voices I found most compelling for their noted disciplines, albeit I don’t know if Mr. Troutwig has any background in Nordic Skiing?

The most appreciated voice to Mwah was John Morgan, who for the past two decades has been THEE VOICE of Olympic Bobsledding! And it just WON’T be the same without him...

Nordic events, i.e.; Cross Country, Biathlon, etc sounded like Al Troutwig to Mwah, while I’ve also thought that Mike roe who is the Narrator for The Deadliest Catch and host of Dirty Jobs sounds an awful lot like ‘Ol Mr. Troutwig to me.

For Speed skating, I enjoy Dan Jantzen’s insights, as he seems pretty knowledgeable, yet presents the event in an interesting manner that lets me know how the competitors are doing in the moment...

And for Moguls/Ariel Skiing I liked the “BUZZ” (Electricity) or Upbeatness that Johnny Mosley brings to the events he’s covering...

Yet, let’s get to the real meat in the sandwich, shall we?

Racing Series
(In “Quazzie” Alphabetical listing; NOT in my personal order of Rankings)

Rankings
So I’ll need to admit right off the bat that I’m totally biased in favour of Formula 1 which is still to me the Pinnacle of Motorsports and will always remain upon the Top step of the Podium, unless they do something radically idiotic, eh? As I’m somewhat leery over which direction the sport will take for its pending 2013 Rules Package, a la Indy Car, which I really hope does NOT give that Delta Wang thingy the nod; SHIT!

That being said, then obviously SPEED’s Trio of Messer’s Varsha, Hobbs ‘N Matchett naturally get the Number 1 plate in my book, as they simply seem to age graciously like Fine Wine and simply get better each season. And although my verdict’s still out upon “BuxZee,” who seems to be a little too “Cheeky” for my liking, I did enjoy him giving Sebastian Vettel a full court press and he can’t be all bad if Joe Saward hired him way back when, eh? Although he’ll never be Peter Windsor who I greatly miss!

Interestingly, my runner-up isn’t an Open Wheel Racing series, as Second Place goes to another Great Trio of voices I really enjoy; the excellent grouping of Diffey, Fish ‘N Schroeder, who like George Phillips noted of the Versus Indy Car Crew, these guys have totally “Jelled!” As there’s a total spirit of playful enjoyment of “Working Together” between them, with much good natured Hi-jinx thrown in for banter...


And I’d have to say that the final step upon the Podium, nee Third Place initially is a tie... Between the Versus Indy Car ‘Boyz and the World Superbike Duo, as Jonathan Green is simply Brilliant, while Steve “Wild “N Crazy” Martin is the total opposite... The voice of reason and calmness... Yet I’m giving the nod to the Versus crew on tie-breaker as I’ve been a HUGE Fan ‘O Jon Beekhuis’s ever since he first became a Pit Reporter alongside Gary Gerald in those hazy Paul Page Dazes!

Thus Fourth Place goes to the Dynamic Duo of WSBK Fame, nee World Superbikes, as Jonathan Green is simply a pleasure to listen too, very excitable, but good natured and sharp, while his Sidekick Steve Martin is an ex-Championship rider who knows what’s exactly going on out there...

As for RASSCAR I DON’T watch that blubberin’ Infomercial... Other then to know that Mike Joy is the only decent one of the Big 3 BobbleHeads, as ‘Ol DW’s been sayin’ Boogity- Boogity- Boogity! Way too long and Lary Mac reminds me of fingernails on a chalkboard... Although he doesn’t seem to make the neighborhood Dog’s HOWL in protest like Rusty Wallace does! Although I’d have to admit that I can actually stomach listening to the TNT Trio of Alexander, Petty & Dallenbach...

As for Pit Reporters, I’d haveda say that Brian Till gets my No. 1 pick, with Chris “Neville Bros.” Neville being runner-up, followed by Justin Bell... While I also enjoy Robbie “Purple” Floyd’s fairly straight-up reporting... While Mr. BRUT Arute-Arute really should just stick to the weather; Oh Never Mind! As that’s “My Take,” Err fourty-three cents worth, as way back when this all started out as a rant ‘bout ABC’s I500 show which when I really boil it down, subtract ALL of the ‘DannaWho LUV-Fest... Is basically just plain vanilla and really doesn’t do one DAMN iota for Mwah! Which means I’d prefer IndyCar to stick with Versus and its current crew! (More Bob Jenkins ‘N less Robbie Buhl...) Actually part of what used to drive me really CRAZY during the CART/Champ Car Days was the constant changing of Network’s and Announcing crews... As I became quite tired of playin’ Find when/where the Indy Car race is?

So who would your “Dream Team” of Television Announcers be?
Posted by Tomaso at 9:01 AM