Was it a Full Moon last Sunday? 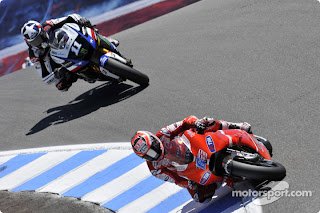 I haven’t tried looking up any Astrological charts or nothin’, so I’m unaware of whether or not there was any Full Moon Fever affecting both the Indy Car and Formula 1 races last weekend, eh? As you already know about the HULIO shuffle in Edmonton, whilst after watching 5hrs of Memorex yesterday I was fairly DISGUSTED with the outcome of the Scuderia’s Hockenheimring Hi-jinx! While the only Hi-jinx at Laguna Seca came from the leading rider “Low-siding” his “Scooter” while trying to run-away from the eventual race winner...

And thus, just when I started thinking Fredrico Suave, a.k.a Fred Alonso was a worthy rival, he’s slipped back into his Ferdi-the-Putz physique... After WHINING on the radio “This is ridiculous...” NO Ferdi, you are! As don’t get me wrong, as I wasn’t surprised by the very blunt “Wink-Wink, Nudge-Nudge Coded” instructions for Felipe Massa to pull over and let Alonso by to give him the victory... As Team Orders have been in F1 since way back when. It was just that it was so BLATANT that I immediately found myself DISGUSTED with the races outcome whilst flashing back to that Austrian GP Debacle between Scuderia Ferrari Marlboro teammates Michael Schumacher and Rubens Barrichello way back in ’02, which was the catalyst for the STUPID NO Team Orders rule... Although apparently Ferrari was fined a cool one million Euros that time instead of the paltry $100k, which I’m guessing Maranello will gladly shill out for the victory, right?

Meanwhile in Monterey, CA, those MOTO GP ‘Loons were dragging their knees ‘N other various Body-parts along with grinding down various bits of carbon fibre bodywork thru that illustrious Zanardi corner, more commonly known as The Corkscrew, where Honda’s Dani Pedrosa gifted FIAT-Yamaha’s George Lorenzo the victory when he crashed out of the lead on lap-11, leaving Lorenzo to disappear off into the distance for his sixth victory in the season’s first nine races!

Ducati’s Casey Stoner, after having several close calls of his own, decided discretion was the better part of valor, settling for a runner-up finish, while ‘The Doctor, nee Valentino Rossi surely turned heads by snatching his first Podium finish in third place since breaking his leg in Italy. Rossi battled with fellow Italian Andrea Dovizioso, who dejectedly noted he was unable to keep pace with The Boss on the races final lap and had to settle for fourth place.

Meanwhile Rookie Ben Spies continues to impress, with another Monster Hole-shot seeing the Texan rocket into third place before eventually slipping back one spot behind The Kentucky Kid Nicky Hayden, who finished in P5 as the Top U.S. rider, while Colin Edwards finished seventh and Nicky’s brother Roger Lee Hayden took a Wildcard Honda entry home to 11th place... As next up is the Czech Republic round before the bikes return Stateside to Indianapolis at the end of August...