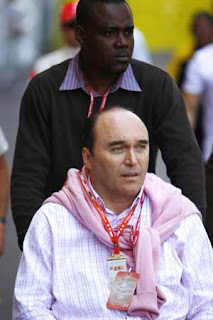 A Rondeau reunion with added Spice

OOPS! I’ve totally deviated from the original Questione that was bouncing ‘round my noggin’ way back when...
As I’d originally thought that this year’s Formula 1 season marked the first time in three decades that there wasn’t a French Grand Primo Piloto upon the F1 Grid; but my research reveals that there were 24 French Grand Primo Piloto’s between 1981-2004; before there were Zero French drivers, first in 2005: while Frank Montagny substituted for Yuji Ide after having his FIA Super license pulled for 4-races at “Super Best Friends” in 2006. Then again in 2007 there were Zero French GP Piloto’s, before The Hamburgular ‘N Romain showed up for a brief spell between 2008-09. ‘As now we’re back to NO “Frenchies,” whilst the likely heir apparent is Ferrari-boy Jules Bianchi...

French Grand Prix Winners
Obviously the most successful of all the Formula One Drivers is none other then Alain Prost, whose statistics stand head ‘N shoulders above the rest, while Rene Arnoux and Jacques Laffite were left to scrap over runner-up status. With Didier Pironi’s three victories being one more then the triumbrant of Patrick Depailler, Jean-Pierre Jabouille and Patrick Tambay, with Francois Cevert, Jean Alesi and Olivier Panis bringing up the rear.

”The Professor” is the only Frenchman to ever win the World Championship, doing it a most impressive four times. (1985-86, 1989, 1993) As Prost currently ranks second in All-time Grand Prix victories (51) and third for overall Drivers Championships behind Michael Schumacher and Juan Manuel Fangio; yet Alain’s battles with Arch-nemesis Ayrton Senna are legendary, as the two traded Championship winning crashes in Japan along with Senna’s hiring at Williams ultimately leading to Prost’s retirement...

I just seem to remember that Rene thought an awful-lot about himself and didn’t make many friends amongst his fellow competitors, namely Alain Prost and perhaps Didier Pironi? As Arnoux was given the boot from Scuderia Ferrari to make room for Stefan Johansson...

Never saw this amiable Grand Prix Piloto race, nor Pironi, Depailler
Jabouille or Tambay, as they all participated before my introduction to Grand Prix racing... As apparently Laffite was part of the Broken Legs Brigade, as F1 chassis had a nasty habit of injuring drivers during the 1970-80’s, as I’d liken Laffite to Riccardo Patrese, as “Gentlemen Drivers.” Thus Jacques Grand Prix career ultimately ended when attempting to equal Graham Hill’s consecutive starts record at Brands Hatch in 1986 when avoiding an incident led to his shattering both ankles.

Yet interestingly, Jacques involvement in Motor Racing can be traced to Jean-Pierre Jabouille, ultimately becoming Brothers-in-law, along with Laffite becoming the very first French driver in a French car propelled by a French engine to ever win a Grand Prix, the 1977 Swedish GP at Anderstorp...

Didier is most likely known for his controversy prior to and leading up to Gilles Villeneuve’s death in Zolder, while Pironi himself would suffer a similar fate of hitting a slower moving racecar, causing him to shatter both of his legs and ending his F1 driving career. Yet Pironi would recover only to be killed in a Powerboat racing accident, while reputedly his girlfriend who was pregnant at the time would go onto name the twins Didier and Gilles...

Unfortunately “De-Pai-eh” was killed in a testing accident at the Hockenheimring before I’d ever read about him, as I mostly associate him as the driver of the second Tyrrell P34 Six-wheeler behind Jody Scheckter, although he was also Ronnie Peterson’s Wingman in those great Six-wheeler’s...

Interestingly, Jabouille started his racing career with assistance from his mechanic-friend named Jacques Laffite... Before winning an F2 Championship with a self-modified chassis before being drafted into Renault Sport for the arduous task of developing the revolutionary RS01 turbocharged racecar, which took a long year-plus to develop. And although his future Brother-in-law made history before him, fittingly Jabouille gave Renault the sports very first turbocharger engine victory in the French GP at Dijon. Yet Jean-Pierre was soon becoming outpaced by rival teammate Arnoux, using Jabouille’s set-up knowledge, before a nasty leg break in late 1980 effectively ended his Grand Prix career...

Although Tambay drove for McLaren during the faltering years of decline before Ron Dennis stepped into the breach, all I know is he was drafted into Ferrari to replace the late Gilles Villeneuve before being dumped in favour of Michele Alboreto. Then a very brief stint at Renault before ending his career with the underachieving Haas-Beatrice-Lola F1 Project...


Francois Cevert
(1970-73) Tyrrell. (1 Win, 0 Poles, 13 Podiums)
Sadly, this promising Frenchman, the heir apparent to triple world champion Sir Jackie's (Stewart) seat in 1974, saw his life cut tragically short when he died in an accident at the famed Watkins Glen racing circuit during practice for the '73 event.

Can it really be 20yrs since Alesi caused quite a stir in F1 when the upstart driver dared to duel with Ayrton Senna in his lowly blue & white Epson backed Tyrrell? Although this was the revolutionary (Dihedral-wing) raised nose Tyrrell 019 Ford V-8 chassis designed by the late Harvey Postlethwaite.

Yet I simply recall Alesi’s Grand Prix career being Star-crossed, as it could be argued he should have gone to Williams instead of Ferrari, but who can blame any driver for not wanting to drive for the Scuderia? As I know I watched him take that lone victory at Il Notre Dam.

Yet I have stronger memories of Jean debuting that scarlet red F40 IMSA Racecar at the Del Mar (Horsetrack) Fairgrounds in California, along with the number 200 on the sidepod of that yellow Jordan chassis...

I recall watching this Monaco winner have a horrendous crash at the Circuit Gilles Villeneuve, striking a concrete Footbridge abutment and shattering both legs... And although he did doggedly return to Formula 1, I’d surmise his career was never quite the same after that massive shunt?


French GP Piloto’sSo perhaps I should mention that it’s becoming even more funnier to Mwah how many of these French Racing Drivers I either know very little about, or paid very little attention to, since my first “Full” Season of watching Formula One was the 1987 season, when as now, there was NO United States Grand Prix. And although I think I knew the majority of Driver’s names? I seemingly gravitated towards the amazing machinery way back when...

Another driver before “My-time” of Observing Formula 1, as Jarrier seemingly made the rounds as a “Journeyman” driver, albeit in the rarefied atmosphere of F1... As Jarrier first substituted at Lotus, driving the Team’s second entry at Watkins Glen, filling the void left by Ronnie Peterson’s death at Monza. Thus Jarrier drove for Colin Chapman’s squad in the ’78 season’s final two F1 events, even managing to claim Pole Position at Montreal before retiring with an oil leak.

After two fairly nondescript seasons at Tyrrell, Jarrier ultimately took over for Jean-Pierre Jabouille at Ligier, who never recovered his form from his nastily broken leg...

Like many French F1 Drivers, Jean-Louis Schlesser made his Grand Prix debut in his home race, the French GP in a RAM-March Cosworth.

Yet Jean-Louis will always be remembered as the man whom Ayrton Senna tripped over... As I recall shouting at le Telescreen; “TAKE-HIM-Out!” As the overly aggressive Brazilian was simply in too much of a hurry that magical day in Monza, when Schlesser was the “Mobile-chicane” in the way as Ayrton tried running over him, incredulously crashing out whilst leading the Italian Grand Prix in what would have given McLaren a “Clean-Sweep” of victories during the 1988 season! Yet the Tiafosi would revel in the fact that ‘Ol Enzo surely was looking down upon them as Gerhard Berger and Michele Alboreto would delight the country with a miraculous 1-2 victory!

Yet interestingly, very little seems to ever be made of the fact that Jean-Louis was the 1978 French F3 Co-Champion with somebody named Alain Prost...

Don’t know anything about him, other then it appears he was the last driver to race a third car in a Grand Prix when he piloted a third Renault at the French GP reportedly as a in-car camera test outing...

Like Monsieur Hesnault above, Philippe Streiff made his F1 debut behind the keyboard of a third “Works” Renault at Estoril in 1984, along with winning the Brands Hatch F2 race for AGS.

Then the following year while contesting F3000 for AGS, he was called up to fill in at Ligier for the crash prone Italian known as “De-Crasheris!” And later on he drove for Tyrrell, even taking a third place finish in Australia. He then secured a Full-time ride with Tyrrell between 1986-87, before moving back to AGS who’d now progressed into Formula One. There Philippe contested the ’88 season with the little French Team before he suffered his career ending injury in a testing accident prior to the 1989 Formula 1 season which left him paralyzed for life. And like Elio de Angelis, Clay Reggazoni and others whose names seem to get very little mention, as most only recall Black Sunday when Ayrton perished, Streiff unfortunately hold’s a dubious place-marker for me, as he was the first driver in Grand Prix circles to be severely injured during my F1 tenure and still seems to be largely forgotten…

Only recall him being dubbed one half of the “Eric Brothers,” who I seem to recall seeing in the flesh at Phoenix, Arizona...

Funny, but the main thing I recall about him is being an absolute ‘WILD-HAIR” man, just really crazy locks...

The other Half of le “Eric Brothers,” as I faintly recall seeing him ‘N Monsieur Bernard; NO! Not Randy, but Eric walking towards me into the F1 Paddock in Phoenix, Arizona...

I seem to recall him more for driving those iridescent Yellow ‘NASTY GT1 Corvette Racing Cars in IMSA over his short lived F1 career...

Interestingly, Boullion was the 1994 F3000 Champion over Franck Lagorce, while Jean-Christophe’s break into F1 came at the expense of Karl Wendlinger, who injured himself in Monaco, one race after the horrible Imola weekend… Where Wendlinger suffered a nasty Coma and prolonged recovery!

Meanwhile I just witnessed Boullion making a heavy crash at the Circuit de la Sarthe this past June, (his 13th start) where he claims his lights went out while the SPEED reporters were left pondering what he’d done during the Yellow flag period to induce his solitary accident...

I first saw Stephane contesting the WRC when you could actually watch the Championship on SPEED... As Sarrazin shared the second Prodrive “Works” Subaru with Aussie Chris Atchinson before making the leap to a Factory ride with Peugeot’s Sports Car Team, where Stephane has sat on the Pole twice at LeMans for the French Lion along with finishing runner-up in the 24 Heurs classic...

Don’t know where it came from, but he’s now known to me as “Frank-the-Tank,” as Montagny briefly filled in for Yuji Ide, who was completely out of his depth as a Formula 1 rookie for the Super Aguri squad. Since then, Montagny has tried cracking the Indy Car scene along with being another current Peugeot Factory Sports Car Driver...

I like calling ‘SeaBass The “Hamburgular...” C’mon, do you really have to ask? Can you say MicDougal’s? As Bourdais is the latest Indy Car Champion to take a shot in Formula 1, although the four times consecutive Champ Car Champion never seemed to quite get to grips with his toro rosso chassis...

Not much to say ‘bout Romain, beside recalling him getting penalized for punting a fellow Japanese GP Driver outta the way during a GP2 Asia race, along with getting the call-up to F1 after Flavour Flav pulled his shenanigans upon Nelson Pickett Junior, a.k.a. Nelson Piquet Jr.

And there Y’all have it, as this concludes a very long winded answer to my original Questione ‘bout if this is the first year in the past three decades without a Frenchman on the Formula 1 Grid? As I didn’t even bother delving into the various Grand Prix Racetracks, as sadly the French Grand Prix seemingly has disappeared from the F1 calendar for the foreseeable future...