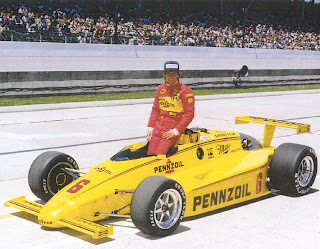 As I’d planned to originally publish this story upon my return from the hallowed grounds of the Indianapolis Motor Speedway, as the original title Penske’s BIG ‘4-Oh neatly coincided with my very first ever Indy 500 in May, 2009, the 100th Anniversary of The Speedway...

Early years
Roger Penske actually had a very brief career as a racing driver before ultimately deciding to concentrate on his role as the boss of Penske Racing, as Penske had won races and championships in the Sports Car Club of America (SCCA) ranks. Roger even contested two Formula 1 races, the 1961 and 1962 U.S. Grand Prix’s contested at Watkins Glen, along with causing controversy in ’62 with his “Zerex Special,” a wrecked Cooper F1 chassis he heavily modified and won in... Causing such uproar that the SCCA rewrote its class rules for the following season, effectively making the car illegal; yet, after upgrading it to current specs, Penske would later sell it to a fellow competitor named Bruce McLaren.

The Penske Racing origins began in 1966, when Roger decided to campaign a Lola Sports car in the United States Road Racing Championship, (USRRC) with driver Mark Donohue racing on a trial basis, having gone on to pass the audition with flying colours!

1969
Having tasted success in other arenas, Penske Racing arrived in Gasoline Alley for the 53rd running of the Indianapolis 500. It was during this month of May that Penske’s now legendary “Attention to Detail” was first fully displayed...

Along with this zest for an “Unfair Advantage,” was a brash, crew-cut Engineer/Driver by the name of Mark Donohue... Behind the wheel of Penske’s four wheel drive Lola T-152, powered by the ubiquitous four cylinder Offenhauser and this team’s tenacity for spit ‘N polish caused many Old Timers to refer to them as the “College Guys.”

Yet, Donohue lined-up forth upon the grid as a rookie in his dark blue number 66 Sunoco/ Simoniz sponsored Lola, finishing seventh overall and having easily won his rookie stripes enroute to being named Rookie of the Year, while displaying a glimpse into the future showings of Team Penske’s desires to be victorious at the Speedway.

1970
Team Penske once again returned to Indianapolis with the Lola T-152, albeit this year a newly designed two wheel drive version for Penske’s choice of engine, as the Captain had joined the “Powered by Ford” brigade, now utilizing a V-8 lump.

The month of May started off with Donohue being extremely fast before the others had caught-up, seeing Team Penske’s pilot qualifying fifth and steadily running his own race, eventually finishing runner-up in his No. 66 Sunoco race car to “Big Al,” (Al Unser Sr.) aboard the unstoppable Johnny Lightning Special.

1971
Roger Penske and Mark Donohue flew to England in search of potential Can Am machinery to purchase and upon their visit to the McLaren workshop at Colinbrook, immediately wished to purchase a McLaren M16 Indy Car, with Penske saying; “Build me one.”

The M16A prototype would ultimately become Donohues No. 66 Sunoco liveried mount, engineered by Don Cox, with its corresponding Offy powerplant producing 700bhp and being transferred to the rear wheels via a Hewland LP500 three speed gearbox.

Team Penske would enter two cars that May, with Donohue and a Rookie “Bloke” by the moniker of “Hobbo,” better known as David Hobbs driving the No. 68 Penske Products Lola/Ford.

During Indy qualifying Donohue was on pole at 177mph, but upon telling McLaren Team Boss Teddy Mayer why he was so slow... McLaren driver Peter Revson used this information to snatch the pole position away with a top speed of 178.690mph, as the crowd roared to life during what was supposed to be Donohue’s Pole winner’s interview.

Thus Donohue was forced to start second alongside Revson, with Hobbs lining up 16th, in Row 6. And while Revson would go onto finish second in the race, both Team Penske drivers Hobbs and Donohue retired, winding-up 20th and 25th respectively.

1972
Penske once again ordered chassis from McLaren, this time two cars, one for Donohue and one for new recruit Gary Bettenhausen, with Donohue qualifying third, on the outside of Row 1, with Bettenhausen lining up fourth in Row 2.

And although Donohue was once again out qualified by McLaren “Works” driver Peter Revson at Indy, this time Penske had opted to utilize a slightly less boosted Offenhauser and when leader Jerry Grant made an unexpected pit stop with 13 laps remaining, Donohue swept into the lead and went on to win the first of Penske’s record 14 Indy 500 victories, after only his (and Penske’s) fourth attempt, while Bettenhausen finished 14th.

1975
Having come out of retirement in 1974, after nearly a year away from driving, Mark Donohue elected to try his hand at F1 behind the wheel of Roger Penske’s own Formula 1 chassis, the PC-1, designed by Geoff Ferris.

Penske’s first choice for driver had been Peter Revson, but sadly Revson perished in pre-season testing at the beginning of 1974. After having interviewed possible candidates, it was announced that Donohue and Penske would return to Formula 1 for the final two rounds of the ’74 calendar at Mosport and Watkins Glen.

While both Penske and Donohue struggled to get the new chassis up to speed, qualifying 24th and finishing 12th, another American team was making its debut in F1, as Parnelli Jones entered a car for driver Mario andretti, who would qualify 16th and finish 7th.

Having become frustrated with his own chassis’s lack of progress, Penske ordered a customer March 751 for Donohue, during the teams first full season campaign. (1975) in which Donohue would record a fifth place finish in the British Grand Prix.

Yet, Donohue would be involved in a somewhat spectacular wreck during practice for the Austrian Grand Prix, when his Goodyear tire suffered a puncture and saw the March chassis crashing thru four rows of catch fencing, along with hitting an advertising billboard.

Having been briefly unconscious, Donohue appeared relatively unscathed, even walking around in the garage and talking to team members and friends before becoming disorientated and being rushed to a nearby hospital in Graz, where it was discovered that he had a blood clot on his brain and emergency surgery was immediately performed. Sadly, Donohue would perish two days after his incident at the Osterreichring, being pronounced dead on Tuesday, August 19th, 1975.

Ironically, Donohue’s replacement for 1976; John Watson would score the team’s lone F1 victory one year later at the very same track before Penske would shutter the operation at the end of the season.

1977
With the arrival of Cosworth’s 2.65 liter V-8 turbocharged DFX variant at Indy that May, the four cylinder Offenhauser finally became obsolete, as the DFX would propel Penske’s McLaren M24 racing cars to new heights. And although Mario andretti was the first to pass the 200mph barrier, the first official one lap record would be set by Tom “The Gasman” Sneva at the Brickyard with his Pole setting run of 198.880mph, including a top lap speed of 200.535mph! As both drivers sought to claim Pole position for The Captain; with Sneva capturing Roger Penske’s first of a record setting 15 Pole positions to date...Yet all of the hoopla surrounding Sneva’s 200mph blast would be overshadowed by AJ Foyt’s historic fourth victory at Indy that May... While Sneva and Andretti finished runner-up and 26th respectively; while later that summer, the Penske PC-5 arrived on the USAC Championship trail, as this car was a close copy of McLaren’s M24 chassis, built at Penske’s Poole, England factory originally set up for his Formula 1 operation, as Sneva would make good use of the PC5, taking victories enroute to winning the National Championship.

1978
Tom Sneva once again won the USAC National Championship, now racing the Penske PC-6, while Penske Racing newcomer Rick Mears was named Co-Rookie of the Year at the Speedway, sharing the honours with Larry Rice, having been hired on a part time basis, sharing his ride with Mario Andretti, who was busy in Europe on his way to winning the Formula 1 World Championship for Colin Chapman.

1979
Having scored consecutive USAC titles, it was quite surprising when Penske disposed of Tom Sneva, opting instead for a less controversial Driver, with someone by the name of “Rocket Rick” (Mears) taking over the reins, in what now appears to have been a “No-brainer.”

Mears would go on to capture his first Indy 500 victory that May, also having secured his first Pole at the Speedway... Along with becoming Championship Auto Racing Teams (CART) inaugural Champion, in which Roger Penske was instrumental in creating.

1981
The year was best known for the courtroom shenanigans which ultimately saw Bobby Unser being awarded his third and final Indy 500 victory, driving for Penske Racing, while Rick Mears would go onto claim his second CART Driver’s Title

1982
Once again Rick Mears sat on the Pole at Indy, his second occasion, before entering into a most epic duel with eventual race winner “Gordie” Johncock, as Mears tried mightily to run down the wily Johncock, driving for Pat Patrick and ultimately finishing as the runner-up. Mears went onto claim his third and final CART Driver’s crown that season.

1984
While a fairly bleak season for The Captain overall, Rocket Rick salvages the year by winning a lone race for Penske Racing, when he captures his second Indy 500 victory aboard a March 84C chassis that Roger had originally entered as the “T-Car” (Back-up) chassis, as the Penske PC-12’s simply weren’t a match that season.

1985
Big Al secures his final National Championship for The Captain by finishing ahead of his son ‘Little Al in the season’s finale, albeit having scored only one victory that season vs. ‘lil Al’s two victories. Meanwhile, teammate Danny Sullivan electrifies the world with his epic “Spin ‘N Win” Indianapolis 500 victory over Mario Andretti.

1986
While Rick Mears would start from Pole position for his third time at Indy, the win would deservedly go to Bobby Rahal, as his team owner Jim Trueman would pass away from his long bout with cancer just days after Rahal’s lone victory as a Driver.

1987
Although originally not hired to drive for The Captain that season, “Big Al” was lured back to action when Danny Ongais crashed at Indy in early May. Penske Racing then hurriedly prepared a year old March chassis which was currently a show car in a Hotel for Al Unser Sr. to drive, who would go onto claim his epic fourth 500 victory that May, equaling “Super Tex’s” feat from a decade prior.

1988
Roger Penske had the best of both worlds that year as Danny Sullivan captured his lone CART Championship on the back of four victories, while Rocket Rick secured his third Indy 500 victory, starting from the Pole for his forth time that May. And for icing on Roger’s cake, was the fact that Penske Racing locked out the front row for that year’s Indy 500 with Mears on Pole in his yellow submarine Pennzoil Special, while “Mr. Hollywood’s” (Danny Sullivan) Miller High Life was in the middle and 49yr old “Big Al” was on the outside of Row One in his Hertz yellow renta-racer... All three piloting Penske PC-17/Chevrolet’s...

To continue reading, see: Penske's 'willPower (Con't)
Posted by Tomaso at 10:22 AM