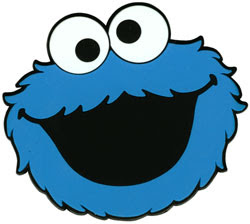 Look for Dan-Dan-Danicker on “Cooking with Regis” this morning… Or is ‘dat Cookin’ with Gas? As the Princess will reveal her secret cookie recipe.
Yeah that’s right Regis, I like to start off with a pint of Worcestershire Sauce… which I like to put on my Huevos rancheros if yuhs know whats I means!
Then we’ll need a pound of lemon drops, some eel grass for decoration and don’t forget the gummy bears…

What’s that Kathy Lee? Oh, you’ll wanna stir it Round ‘N Round… Preferably to the left, unless you’re in the Orient… Then you’ll definitely wanna stir it clockwise.

What Heat do I use Kathy Lee? Well us Girls heat’s is always on Hee-Hee-Hee…After all us Go Daddy gwirls gotta sticks together…

Yeah Regis, I like to set the oven on about 165… NO, Slow ‘N Steady wins the race, Err cooks these nicely, as Y’all don’t want ‘dem Peakin’ toose early!

But watch out for Dan-Dan-Danica “N the Cookie Monster, will you Kosuke… (Nice job Will!)
The Danica Scandal
Yeah I know this is a tad bit optimistic… But what the HELL, eh? As I’d like to see the forlorn Kosuke Matsuura have a “Reely-Reely-Reely” BIG race, perhaps bustin’ out a Top Ten finish… Or even better yet, a Top Five or Yikes! The final Podium step, as it would be an added boost for both the previously censored Japanese driver and Conquest Racing, as Kosuke makes his Indy Car return after a two year hiatus, with Matsuura & Conquest recently testing at chicagoland to knock off the rust prior to his Twin Ring outing.

Meanwhile, very little has been said about Roger Yasukawa’s reuniting with Dreyer & Reinbold Racing for this weekend’s Twin Ring IRL outing, as I’m assuming the deal’s still on? Which would see a total of three Japanese racing drivers contesting their home event…

And although a little bit dated. (I’ll update after this weekend’s event) you may wish to read my story: Japanese Open wheel Warriors

AND DON’T FORGET!
You can catch ALL of the Twin Ring Motegi Indy Car action on Versus, with their Qualifying show at 3PM and the Race at 7:30PM, both on Friday – September 18th. (ALL TIMES PACIFIC AND ALWAYS CHECK YOUR LOCAL LISTINGS!)
Posted by Tomaso at 8:48 AM