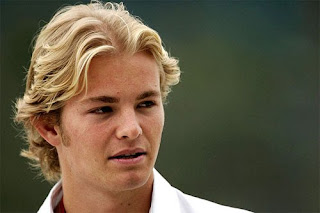 So, for obvious reasons… Like Formula Uno-itus, eh? My favourite memory ‘O Auntie Harriet has to be about hearing the following story which I originally posted in Indy Day Trippin’ way back in the summer of twenty-Oh-seven…

Calling Auntie Harriet, I was most shocked to hear her story about who’d sat next to her on her flight home from Indy.

At the very last moment a young whipper snapper sat down next to her, as it was the last seat on the plane, and noticing that the young German kid with long blond hair had a slightly funny sounding accent. Harriet inquired, so where are you from and what are you doing in America?

After a long pause the kid said. “Ja! I am Nico Rosberg! I have just been at Indy to race in the USGP. SHEISA!!! Harriet had to sit next to F1 Williams Rookie driver Nico Rosberg on her flight from Indianapolis to Chicago as this was the only flight poor Messer Rosberg could find in order to make his connections back home to Germany.

Harriet told him how she’d just attended her very first Formula 1 race (at 87 ½ years young…) and how I was a huge Formula 1 fan… Just before landing the young German who’d turned 21 during the break between the Canadian and USGP reached for his briefcase and pulled a card out. Then of course neither of them had a pen, so they frantically searched for a writing utensil and finding a pencil. Nico scribbled an autograph onto his race card for Mwah…

SHEISA!!! How come I never get to have anybody famous sit next to me, eh?
Posted by Tomaso at 8:21 AM