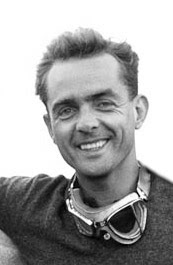 This weekend’s upcoming Italian Grand Prix sparks a host of memories and emotions for me, since it was one decade ago that your Humble Scribe made the pilgrimage to Italy, embarking upon a most amazing first trip abroad, partaking in the most excellante Grand Prix Tours Italian Extravaganza… With special guest host Phil Hill, whom sadly past away just over one year ago, and like many events in life… I’ve simply managed to let time slip away without remarking upon America’s first Formula 1 World Champions passing…

As although I don’t consider myself alone in participating with these yearly GP Tours treks to Monza with Messer Hill, nevertheless I feel very fortunate to have spent a week’s time rubbing elbows with this legendary racing Piloto; as we were shepparded thru both the Lamborghini and Ferrari Factories, a private Automobile collectors Estate, the Alfa Romeo museum and lastly the Italian Grand Prix at Monza…

Yet I also recall Phil Hill showing a serious, caring side of himself when entering the Hotels bar where he and my roommate had been watching the CART practice session from Laguna Seca when gravely he announced that Rookie Gonzalo Rodriguez had just died in the Corkscrew; as I wonder how many Drivers’ deaths had Phil endured? As many will know that it was Hill’s Scuderia Ferrari teammate, the late Count Von Trips who perished at Monza in order for Phil to capture his Grand Prix crown.

Then again, how many people even recall the 27yr old Uruguay natives Tragic demise occurring ten years ago today behind the wheel of a Penske Racing chassis…

Meanwhile unbeknownst to me was the fact that Mr. Hill was in pain the whole trip while awaiting hip replacement surgery!

Maranello
(Wednesday, September 8, 1999
(All I have written down for today’s journal entry is that today we’re seeing RED!) As in FREAKIN’ FERRARI ROSSO!
I remember riding our tour bus through the very “ritzy” upscale strip-mall shopping district of the tiny city of Maranello on our way towards the factory. YES! Today I’m going to be entering the hallowed halls of the Scuderia Ferrari Factory!

Exiting our motor coach we’re inside the fairly non-descript front building, walking inside the lobby. The small room was painted the vibrant tone of Ferrari “fly” yellow… I recall our tour group milling around admiring a large sculpture while Phil Hill had disappeared inside an office. Then everyone clammered together trying to be closest to the front, in order to be first; as our tiny tour group was divided into two half’s and everybody thought they’d be with Phil in the first group. But as usual, I shied away from the fracas and waited to go with the second entourage. So imagine my happiness when this was the group Phil elected to go with. I just remember beaming to myself that my tour guide of Maranello was none other than 1961 F1 World Champion Phil Hill! (FRILLIN’ INSANE!)

First we walk to the foundry building, where Ferrari casts its own engines; where we looked at a freshly casted block and various other parts. While walking through the engine assembly area, I notice a giant NO SMOKING sign adorning the wall. This is extremely hilarious as we stop to view an engine work bench. There sat an Italian assembling a V-12 engine crankshaft with its catch tray littered full of cigarette butts...

Walking through the factory towards the body assembly area a gaggle of shop employees came running towards us. Gleefully talking excitedly in Italian, as they sought out Phil Hill for his autograph holding racing books open... They were all very young employees and unlike Lamborghini they all wore matching uniforms. Sporting bright Ferrari red pants and white T-Shirts emblazoned with the racing teams sponsors.

Approaching the final assembly lines which unlike Lamborghini were totally automated, I was quite impressed with the bright yellow robot arms doing various assembly functions. As the line also seemed much cleaner than Lamborghini’s; as it was fascinating to watch the two separate assembly lines merge into one, with the completed bodies dropping from overhead to awaiting completed drive train chassis…

I remember standing there totally enamoured as we watched a worker stuff flexible exhaust hose tubing onto a just completed silver 360 Modena’s exhaust. Then on the very first turn of the key, the engine fired as we listened to the sweet sound of the idling Ferrari burble away! Since at this time Ferrari had just three models in production; the entry level 360 V-8 Modena alongside two V-12 models: The 456GT/GTA and 550 Maranello.

Ferrari had just completed building it’s special run of 349 F-50’s and the 360 Modena’s were on one assembly line, while the 456’s & 550’s occupied a second separate assembly line.

Next we walked outside and I remember there being Ferrari’s littered (parked) everywhere, before we entered a small room where the Ferrari’s received there final inspections after being “road-tested. As they go for brief jaunts on the nearby public roads, although Ferrari owns its own test track.

Then it was back to the lobby to re-join the other half of our tour group.
Of the few notes I took that glorious day, they’re mostly related to production facts that were gleamed from our most pleasant Italian (male) tour guide. (Who I believe was a University student) At this moment.)

Ferrari offers a choice of 17 colours, with Italian’s favourite choice being Rosso. (Red) (Of course) their other favourite colour = Yellow.

At this time Ferrari had 2,000 employees including 500 devoted solely to the racing department.

Walking back through the front gate and leaving the factory way too quickly! We sauntered across the street for lunch at the factory restaurant… (Just another typical day in Italy, eh?)

As the Cavallino Ristorante is a very famous place, where we had a very long table awaiting us; resplendent in checkerboard car motif table covering. As we sat drinking a little vino along with our first course a voice said: “Quick. Look out the window!” It was Luca di Montezemolo and Jean Todt strolling by as our head waiter immediately disappeared! As they were on their way to the private dining room.

I recall having a wonderful three course lunch served in white stone china with a small black band along the top edges of the plate/bowl with the Prancing Horse logo in black, whilst sitting at the long table discussing our morning’s Ferrari experiences the sun shone through the large rectangular window that we’d previously seen Ferrari “royalty’ saunter past.

After lunch we were given free time to explore the surrounding shops before leaving for the Ferrari Museo, as I recall standing in the warm sunlight watching a pack of laughing Ferrari employees rush past me… As the throng of red & white clothed employees quickly ran through the cobblestone courtyard, obviously on there way to lunch, before a small group of us decided to walk down to the Fiorano test track, since we could hear the siren song of a Ferrari F1 chassis being fired in the near distance! As we practically ran down the street the entire way as the noise grew louder! Standing along the edge of an embankment, we were treated to the brief glimpses of Mika Salo performing test work prior to the upcoming race.

In our euphoria we’d totally forgotten we were standing alongside a two lane highway. To which we were quickly awoken from our discretion by a delivery truck blasting us with his horn, urging us to get off the road!

Then it was time to return to board our tour bus for the brief journey to the Ferrari Museo, where I seem to recall that as we approached the entrance there was an automobile hanging from the wall! As there were several Ferraris inside the two story building, with the stairway being lined with case after case of pictures of various drivers, team members, etc. With myself being drawn to a collection of Niki Lauda pictures…

The top floor was unbelievable! Filled with Formula One chassis, there were Gerhard Berger’s and Nigel Mansell’s cars to walk around, as these featured my favourite livery of AGIP. (Pre-Shell Oil sponsorship) While along the Museo’s far wall, was a fantastic full size mural painting of Michael Schumacher’s car racing through the rain… While In front of it was an early Schumacher chassis.

Downstairs were a bunch of Italian street cars. As I think there was a yellow Dino on display, but I mainly remember the two Ferrari F-40’s parked side-by-side as being my favourite. One of these cars was an awesome F-40 LM. (Le Mans) race car, with both being in Ferrari Red with no sponsorship decals on the LM chassis…

Then a quick visit to the gift shop, which although had an amazing amount of merchandise overflowing it, was simply too crowded for me. Since it was just a tiny “whole in the wall” boutique, but of course my trip roommate Sean had to ask if anybody wanted to know the time? (Does anybody really know what time it is?) As he’d just bought a TAG/Ferrari wristwatch along with a Ferrari team jersey… (Which he wore to the race track…)

Then all too soon it was time to depart and return to the Hotel Fini. For our final night in Modena, as the majority of our group went out for dinner at a nearby Ristorante, which I remember having trouble seeing in the dark…
Posted by Tomaso at 8:03 AM