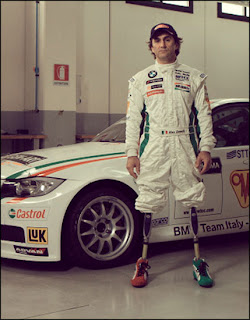 Today marks the eighth anniversary in a day that I’m certain a one
Alessandro (“Alex”) Zanardi wishes to have never happened, as he nearly lost his life! Along with both of his legs and most likely causing Alex Tagliani to suffer nightmares of an out of control spinning racecar careening directly into his path!

Yet, out of this tragedy, Zanardi, the ever youthful optimist has triumphed repeatedly, as I fondly recall watching him kick ARSE two years later when there wasn’t a dry eye in the Euro Speedway House when “Zorro” took to the wheel of a specially adapted Reynard Ford/Cosworth Indy Car chassis and set about running off the final remaining (13) tribute laps of his uncompleted 2001 Lausitzring race where he was leading with 13 laps remaining before enduring his horrific shunt…

Thus it was even more impressive that during his return, not only did he climb back into an Indy Car, Alex incredulously ripped-off a top lap speed of 194mph+, which would have qualified him fifth for the days event!

Yet, the amazingly energetic and joyful Italian has since gone on to drive a BMW-Sauber F1 car along with currently competing in the FIA World Touring Car Championship, (WTCC) continuing to win races for Team BMW Italy-Spain, run by ROAL Motorsport and most recently claiming the Czech Republic’s first round on June 21st. Not to mention his ever improving competitiveness in Hand-bike racing, of which Zanardi finished 4th in the ’07 New York Marathon, basically on a dare!

Bravo – Magnifico Alessandro!
Posted by Tomaso at 8:58 AM