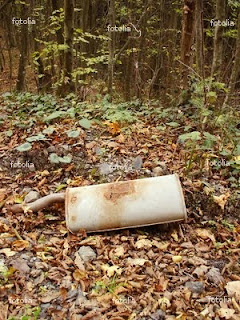 Whale as somebody once said: the best laid plans ‘O Men ‘N Mice, eh? As your Humble Scribe is able to report that he struck out upon his “Quest” for those ever elusive critters affectionately known as Snipes, instead becoming the feast for a swarming pack ‘O Mosquitoes... As Tacoma Bureau Chief Mary Ellen and I spent time in the wilds of the Pacific Northwest in a somewhat wooded section near Baker Lake… Situated between two ponds, one replete with a pack ‘O Busy Beavers and hence the proliferation of those overly annoying pests!

Taking a walk down the dirt road, as we neared a pond where the Mosquito population seemed to increase… Much to our DISGUST! Mary Ellen pointed out the heaping stack of white plastic front ‘N rear automobile bumpers that had been illegally DUMPED by some JACK ARSE!!! (Repair shop?) As I could only surmise that the Yeahoo’s who’d done such a SHITY thing were unwilling to dispose of the 30-40+ car bumpers properly since there was seemingly NO scrap value due to the excessive usage of plastic; SHEISA!

On our return trek Mary ellen pointed out Mount Shuckston directly ahead of us in the distance, before later in the afternoon as we hung about the field of bumpy grass in the warm sunlight, where we also discovered a missing golf ball; while I was constantly snacked upon around my elbows ‘N knees which seemed a strange area of Mosquito attack; (Hey! There AIN’T supposed to be Mosquitoes out in force in September!) Suddenly a Helicopter appeared outta nowhere, swooping quite low as Mary Ellen could see somebody sitting in the doorway as the ‘Copter continuously circled our location alongside the nearby tree farm… And then a second ‘Hellie arrived as I asked if the man sitting in the doorway had a 50 caliber machine gun in his lap? Before musing those ‘Ol Bruce Cockburn lyrics:

Here comes the Helicopter,
Second time today,
If I had a rocket launcher,
I’d BLOW that Sucker AWAY!

Yet our trip was cut short due to the incessant amount of precipitation that arrived early Thursday morning… As what are Holiday weekends preceeded by? Yep, three days ‘O RAIN! As Mary Ellen said let’s get outta this field before it becomes a total mud bog… And thus we set our sights upon Mount Vernon which was the nearest Greyhound Bus Station. But it wouldn’t leave for another four and a half hours said the man behind the glass; but you could catch the Amtrak that’ll be arriving momentarily… SHEISA! As we made a last ditch effort to retrieve all of my gear, purchase my ticket from the kiosk and catch the train… Which fortunately in true Amtrak service fashion was running approx. 25+ minutes late… As fortunately Amtrak has just been granted the adding of additional service from Olympia to Vancouver, BC for the upcoming 2010 Winter Olympics in Vancouver, BC, which as Larry sez; will be a NIGHTMARE!

As I stood at my first bus stop after departing the overly full morning train to Portland, OR, while trying to stay dry in the bus shelter, a couple waiting for the bus inquired where my train had come from? And then told me how the coach sections of the Amtrak trains to Vancouver, BC during the Olympics were already sold out and they’d had to purchase Business Class seats for the return trip instead, some six months prior…
Posted by Tomaso at 4:04 PM