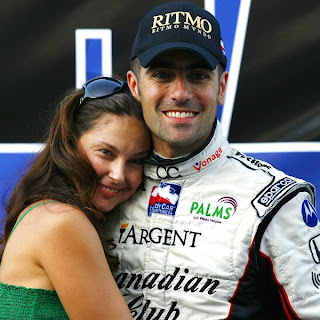 Although the racing world has moved on, with several rounds of the championship having been run since the month of May. I’m sure that Dario “R.E.O. Speedwagon” Franchitti is still pinching himself over winning this year’s Indy 500.

And it couldn’t have happened to a nicer guy than Dario, whose career has seen its ups & downs. Having made another mistake and aged the Scotsman an extra 10 years. Dario actually celebrated his 34th birthday with cake in the face live on TV prior to winning the Greatest Spectacle in Racing.

This makes it hard for me to believe how many years ago it was when Dario was fighting for the championship in CART alongside teammate Paul Tracy at Team Kool Green. As Dario was just another “Young Gun” to me back then, while watching him win in Vancouver, BC.

Franchitti’s best career seasons in CART were 1998 & 1999. As the ’99 season saw Franchitti tie Juan Pablo Montoya for the series championship, yet loose on tiebreaker to the Columbian. As I still believe the Scotsman was morally gutted by the death of close friend and competitor Greg Moore that fateful day in California.

And I was unaware that Franchitti was another alumnus of the vaunted Paul Stewart Racing team, which ultimately “morphed” into Stewart Grand Prix before being transformed into the duly departed Jaguar F1 team. Of which has now become Red Bull Racing.

Franchitti was part of an all star cast of Open Wheel racers with Gil De Ferran, David Coulthard, Rubens Barrichello, Jan Magnessen and Ralph Firman to name just a few.

Thus it’s funny to note that Dario is clinging firmly to a fast disappearing points lead in the current Indy Car championship. With his main title rival becoming Scott Dixon, with both competitor’s being ex-CART protagonists. As Dario seeks to win his first major championship in the “All Oval” racing series.

So why all the belated fanfare over the Scottish Speedwagon? Well as you finish reading this. I’ll be departing for my trek to Mecca, hopefully to experience the ride of a lifetime. As I’ve secured my time slot to strap on a chauffeured ride in the back seat of Sinden Racing’s two seater at IMS this Tuesday afternoon!
Brickyard Flyer
Posted by Tomaso at 10:51 AM