(Editor’s Note: Not to be outdone by my new Indiana Bureau Chief Danny B. I thought I’d better include a photo of Sir Stirling along with the final installment of Stirling Speaks. Yet I must say that Dan has much better taste…) 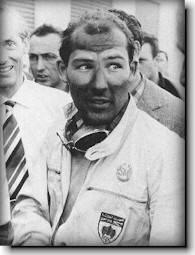 Next Dave Despain put a caller “on-air: to speak with Sir Stirling, asking for Moss’s thoughts upon today’s “ultra-safe” race cars and lack of passing, etc. To which Moss replied “Well I am definitely the WRONG person to ask…”

“Motor racing is a dangerous sport.” Look when I was and Idiot at 17 or 18 I wanted to have a go at it because it was dangerous! When you’re young you want to put your life on the line…

If a man wishes to risk his neck than I think he should be entitled to that, but as a driver our main concern has always been for the safety of you the fans and of course the marshals.

A modern day Formula 1 car is a fantastic machine… (Did you know that they’re ultra safe?) I recently had the chance to drive one. And I was doing around 180mph and I simply lifted off. And the deceleration (G-Forces) from simply lifting was more then I ever had in my entire career of 525 races with the brakes FULL ON!

We’ve got so much safety today that almost nobody dies in F1, which is a good thing. And I don’t want to say it’s easy, because it’s certainly not, but an element is missing as there’s almost no contempt of danger.

Coming back from commercial break a second caller asked Moss to name who he thought was the greatest Formula 1 driver? (And feel free to include yourself, the caller interjected) Stirling paused for a second and then said.

That’s impossible! You just simply cannot compare drivers side by side. I mean I think you need to break it down into two categories. One would be when it was “Bloody” dangerous, like from beginning to the mid 1960’s (I’d disagree there as drivers still routinely perished thru the early ‘80’s) And Two would be from the mid ‘60’s to present.

Of course I’m biased, so I’d say Fangio, Jimmy Clark or Tazio Nuvolari. Now I drove against Nuvolari towards the end of his career and he wasn’t that great, but Nuvolari was simply a “Magic Man…”

Then in today’s era I’d have to say Senna. Of course many people would say Michael Schumacher, but for me he simply wasn’t as good as Ayrton Senna!

Despain then inquired if Stirling liked the title of greatest driver never to win the World Championship or does it bother you? Oh NO! I guard that title jealously! It may sound like I’m touting my ego, but there were lots of World Champions I could beat and a few who’d beat me.

I mean there’s several drivers who never won the World Championship that I deeply admire like Dan Gurney or Tony Brooks.

Despain then asked if he had the story correct where Moss could have become the first British World Champion but defended his rival instead?

Yes, I could have won by a half point or something but I told the Stewards that Mike Hawthorn had done nothing wrong and should be re-instated as it was clearly a rules technicality only.

Mike was my friend and I knew I could beat him… And he’d simply gone down an escape road and done nothing wrong. Re-instating him to second place as I’d WON the race gave Mike the championship…
Posted by Tomaso at 9:46 AM