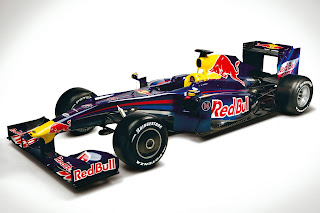 Adrian Newey’s latest creation, the Red Bull RB5 broke cover Monday at Jerez, prior to the upcoming test session, with new “Shue” Sebastian Vettel being given the honours of running the new car on its installation laps, as Mark Webber who was on hand is still recovering from his broken leg, but plans to be back in action shortly.

Vettel ran a modest 14 laps before the initial test session was halted due to rising gearbox oil temperature... Hmm? Wasn’t that one of RBR’s Achilles heels last season? Yet, interestingly the RB5 ran with its KERS system fitted, but not activated, as the team simply wished to see what the added weight characteristics were along with any potential harmonics troubles.

And like all of the new 2009 F1 challengers, I’m assuming the front nose is very flat looking, which seems to be part of the designer’s solution to clawing back aerodynamic losses due to the radical rules changes.

Look for the RB5 to run during testing this week in Jerez with both Red Bull regulars behind the wheel, alongside a quartet of their fellow competitors, while Ferrari, BMW Sauber and Toyota will go testing in Bahrain. Thus, Force India and the hoped for rebadged Honda F1 outfit are the only two teams to have not broken cover as we close in upon the season opener in Melbourne...

Sebastian Vettel:
"The guys did a fantastic job to get the car here and ready for this first run. I was happy to be driving again, but don't ask me to comment on the feel of the car as it's far too early for that. With the shakedown out of the way, we can get down to developing the car starting tomorrow and over the next few days. Stopping early today was the right decision, as you really need to understand exactly what causes any problem on a brand new car."
(Source: Motorsport.com)

Launch notes
Posted by Tomaso at 8:10 AM