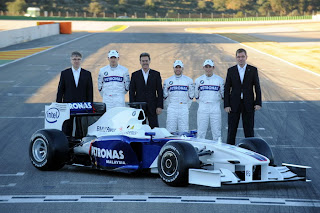 And while rivals Renault and Williams were busy debuting at Portimao the day before, BMW Sauber launched its newest contender, the F1.09 at Valencia on January 20th with Robert Kubica getting the honours of first drive.

As BMW Sauber enters its fourth season, Team Boss Dr Mario Theissen was quick to drone on about the requisite Launchspeak; “We’ll be better this year, we’ll fight for the title and our car will jump over the Moon!” Blah-blah-blah...

Yet, the F1.09 is a strikingly good looking chassis and according to BMW Sauber managing director Walter Riedl:
"The development of the F1.09 centered on three key areas: aerodynamics, optimum tyre utilization and the integration of KERS."

As I’ve read somewhere on le internets... (So it must be true, eh? Thanks Al Gore) that it reportedly features a novel sidepod design, of a wedged shape a la early 1970’s F1 design. *Think of Gordon Murray’s wonderful Brabham BT44) Yet, as I’m a visually impaired pundit, I’ll leave the keen technical scruntinizing to Messer Collantine over at F1 Fanatic, whom as “Hobbo” would say; Has the eyes of a certain type ‘O rat!”

Launch notes
Posted by Tomaso at 8:11 AM