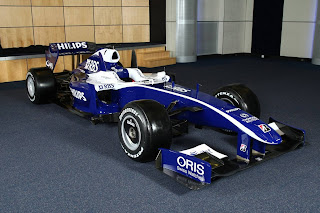 The Williams FW31 broke cover on January 19th at Portimao Circuit, with test/reserve driver Nico Hulkenberg at the helm, with no major difficulties occurring during its shakedown run. The FW31 to date is the only 2009 F1 challenger to utilize a flywheel driven KERS system, as opposed to the battery storage systems of its rivals and the mechanical system utilizes a flywheel spinning at an incredible 64,000RPM’s; of which the Williams concern has filed for patents upon.

Racing driver Nico Rosberg then put the FW31 thru its substantial paces by doing a Herculean test session where he ran a staggering 145 laps before inclement weather scuttled further testing.

And in case you’re wondering about the dark blue livery, Williams claims that this isn’t their final colour scheme, which will be revealed at the end of the month. But don’t look for any signage from the Bogger group, as the Icelandic corporation has just filed for Chapter 11 bankruptcy...

Launch notes
Posted by Tomaso at 8:29 AM