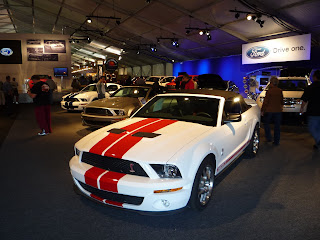 Otay Race Fans! Bear with me just a little bit longer as I try to exorcise the 2009 Barrett-Jackson festiva outta my psyche... (And try to load this MONSTER file onto my "BLOB!")

But first...
Stealing the phrase out of the Saint Louis Rams playbook, I’m certain that the Barrett-Jackson folks would take kindly to being called “The Greatest Automobile Auction on Turf!”

After having seen the Auction via the Telescreen over the past several years, in which I scribbled about in Fast Cars, along with my Blogmeister Miguel having attended last year’s show... I told him; “I WANNA GO!” And thus, this was my excuse for going to Arizona this January, in order to finally see in person what all of the fuss was about.

Presenting our tickets we immediately entered the beginning of the massive vendor display tent, which stretches on for miles ‘N miles, as the very first display was an awesome gathering of six 2010 Ford Shelby GT500 Mustangs parked three abreast at 45 degree angles. And these are some BAD ASS looking mother’s! All adorned with the traditional twin stripes treatment, as a few were convertibles, with the rest being coupes. (Suggested retail price of $46,000 MINUS Dealer Mark-up!) And I even got to sit behind the wheel of one convertible...


But even wilder yet was the two Shelby Mustang’s on roller’s set up for a Mano E Mano (Stoplight) drag race... As the two participants both chirped the tires in their first trial run. Then it was time to rumble as the lights went green and more rubber could be heard being laid down as the winner from New York made a quarter mile pass of 13.86 seconds @ 101mph, while the loser cut a slow time of 16.20 seconds.


While I hung out briefly next to the Black Shelby nearest the racing stage, the traditional Odor ‘du burnt rubber wafted past me inside the tent as smartly the door was locked upon the black “Stang; DAMN! So, my day was totally made and we hadn’t even looked at a single car yet. Aye Carumba! This is gonna be fun as we made our way past the Ford booth and into a long cavernous room filled with even more automobiles, not to mention boats, planes and helicopters... As I was simply blown away by the staggering display of Hennessey Performance Vehicles, with a few showroom Beasts on deck! A Narly 1,000bhp Dodge Viper, a Killer twin turbocharged Ford GT with a top speed of 240mph, a Corvette ZR1, a Freakish 2010 Camaro with ZR1 power plant and a bad ass Nissan GTR. Opposite of this was a Koenigsegg CCX from Sweden and a bright yellow 2006 Gumpert Apollo, of which I’ve never heard of... As it looks more like a race car then street car, being extremely low and wide, thus I had to marvel at myself as I pronounced how extraordinarily “Plain” the bone stock rosso Ferrari parked in the middle of the aisle looked. Crikey’s when has a Ferrari ever looked dull?
Past that poor plain Jane Ferrari was the Chevrolet display, which I’d have to say that the brand new Corvette ZR1 looks Awesome, while alongside was the 2010 Camaro. Hmm? And I thought we were in a recession? So are we now paying for the “Big 3’s” R & D costs? Thus, after marveling over the new Camaro, (Can you say 21st Century Pony car Wars?) we elected to skip the rest of the never ending vendor tent and instead go look at some of the auction-mobiles outside


We passed thru a row of Newell custom coaches and semi’s for sale, before running into the Roush/Superformance display booth. This was sweet, as a brace of Ford GT40 Replicar’s grabbed our attention. As not one but two Gulf Oil #6 winning 24 Heurs du Mans chassis stood parked, ready to race. As we got chatted up by a salesman trying to interest us in a Cobra replicar, I didn’t even notice the black #2 Ford GT40, as I was focusing upon the #98 Cobra Daytona Coupe re-creation with another cobra roadster parked alongside it.


"Make your Pony stand out with a Mustang racing stripe like the one in the picture above,"

There were five massive tents with four rows of cars parked underneath them... As it seemed quite funny that the 150-200 vehicles approx. per tent were parked upon either grass or dirt, with some owners trying to wipe away all of the dust particulates from their respective vehicles, most notably the owner of a custom 1973 De Tomaso Pantera with a gold plated 4 cam Mustang mod motor behind the firewall... Yeah, that’s right, solid gold plated! Not to mention the paintwork.

The first two tents up for perusal, were numbers 4 & 5, as we began with tent #4 which appeared to be a “Chevy-esqe” affair as the nearest row to the outside of the tent featured a plethora of past racing cars, with the very first two sightings being past IndyCars... These two bright Pennzoil yellow No. 4 chassis turned out to both be old Panther racing cars with one adorning the name of some past Indy 500 winner... Sam Hornish Jr. While the second vehicle sported both Hornish and Tomas “Rockem Sockem” Scheckter and sporting a large American flag decal on the engine cowling, as these IRL chassis both turned out to be ex-Show cars propelled by Chevrolet V-8 lumps.

Another really cool racecar was the Cadillac ALMS Prototype which was, you guessed it! Extremely low to the ground, as Miguel noted the 2-3 inch ground clearance of the front splitter... Looking quite striking in its silver body colour, while a third IRL Indy Car was parked alongside. This was a most interesting chassis as it claimed to be a cut-away car, although completely assembled and painted white/red/black... Hmm? That reminds me of an old Honda CART paint scheme; possibly Parker Johnstone/Mike Groff? (Woah Nellie! Way back machine, eh?) As this chassis didn’t sport any car number, etc. yet, the sidepod was resplendent with the word Oldsmobile... Thus I’m assuming this racer was powered by an Oldsmobile Aurora V-8 lump. (As we never did spot the second IRL Cut-away chassis up for grabs)

There was then a small smattering of ex-Trans Am, IMSA and Off Road racecar’s for sale, including a duo of Larry Raglan Desert vehicles... And this doesn’t even include the production based cars in the tent, as the hour of high-noon fast approached we decided it was lunchtime...

(Having received my ’09 Barrett-Jackson catalog from AZ Bureau Chief Mary Jane; it finally provided me with the clues towards the unnumbered Indy Cars up for auction...)

After some high priced sandwiches, no tenderloins here bubbah; as in “Where’s the Beef?” We set off for the final three tents which held a staggering number of “Muskel-carzs.” Actually the word stimulus overload (NO! NOT Stimulus package, eh?) came to both of our lips quite frequently, as I’d say about 60/70% of all vehicles up for auction fit this genre., intertwined with a heavy dosage of 1950’s Detroit Iron... Hey look, there’s another Corvette, Mustang, GTO, ‘Cuda, etc. But don’t get me wrong, the majority were the crème of their respective marque’s past offerings and many would once again obtain six figure prices, although I just DON’T get it!

Some rarities included a small smattering of Porsche’s and Ferrari’s, although I’d guess that the Ferrari Mondial didn’t garner large dinero, while there was a beautiful 930 slant nose, along with another re-creation and a 928 on the grounds... Yet I was most entranced by a solitary 1948 Ford cab over pick-up stuffed with a 429 big block and a Boyd Coddington Quarter Midget on its flatbed. This gem would go for $75,000 on Friday night.

Then we stumbled upon the Park Place Motors Ltd booths which held sentimental value to me, since I’ve been in their store before which is located in Bellevue, WA. Walking inside the miniature showroom, a beautiful Lotus 211 was holding station alongside a trio of Spyker’s, which were all retailing for $235,000+. Outside a duo of Porsche Speedster replicar’s sat with a second Park Place display housing several top flight auto’s including another Spyker and beautiful metallic silver ’95 Ferrari 355 spider (Lot #1239.2) which sold for $88k on Saturday.

Gumpert Apollo (PBM)
Having finally looked at all five tents, we’d still not seen any of the top dollar “Super Saturday” cars, which I’m assuming were housed in the Showcase Pavilion, which houses a further 200 vehicles, that we never did manage to get too. Although we encountered a consignment tent while scouring the grounds for the Showcase Pavilion, where I’m still assuming the blue ribbon BOSS Mustang’s, Shelby’s, Cobra’s, Camaro’s, etc were hidden in... Yet, we managed to spot our very first Lambo, a Lamborghini Diablo VT roadster, while off in the distance was Robosaurus... But, while trying to work our way towards the Showcase Pavilion, we were told we couldn’t enter the tent... Why’s that? Because it’s a quarter to four! And the show closes in 15mins. Yikes! A full five hours had passed us by... And you already know about the rent-a-cop NAZI’S at the exit!
Kudos Miguel!